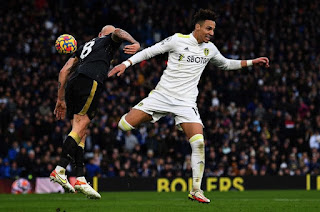 Leeds United suffered one of their worst days of the 2021/22 season at the hands of Newcastle United.

The Magpies, to their credit, soaked up a lot of first half pressure and then took their chance in the second with Jonjo Shelvey's free-kick. Eddie Howe's side looked well worth a second goal after that too, even if they didn't achieve it, but the Whites will be bitterly disappointed to have lost to such a struggling side by such a goal.

Here's the YEP take on what was an awful day for Marcelo Bielsa and his team.

It might not have been a complete performance but some of his passing was exquisite and he lasted 90 minutes, which is a huge and unexpected step forward. It's still unclear, even after so much time, quite what he is but he's got terrific ability. Leeds should have made more of the situations created by some of his play in the Newcastle half.

In the first half he was dynamite and Newcastle couldn't cope with him. It was a similar story for some of the second half, but at no stage could he produce end product and at times his decision-making was off key. Leeds look to him all the time and at times if he's unable to do it, they don't look like scoring, which is a worry.

The decision to foul Allan Saint Maximin was a poor one. It might have felt necessary at the time but Struijk appeared to be providing cover. There are times when Llorente's aggressive defending, which can look chaotic due to his exaggerated movements, leaves him at the risk of giving away fouls in dangerous areas.

The movement of Fabian Schär towards Jonjo Shelvey's strike appeared to deceive or distract the Leeds keeper and the ball ended up in the net. It wasn't his finest moment and nor was the Ryan Fraser cross that crept through him and had to be cleared from the goalmouth.

He came on to change the game but his major impact was detrimental to his side. The giveaway that led to Newcastle's counter attack prior to the goal was as costly as it was needless. Roberts has come in for criticism that at times has felt way over the top and he has been scapegoated unfairly, but he won't be happy with that performance. Just didn't seem at it.

If Leeds had won this game and made it three victories on the bounce, the mounting discontent over a lack of January transfer business could have, to a certain degree, been waved away. Losing in the manner in which they did will only heighten the worries in sections of the fanbase. At the start of the window Kinnear highlighted Bielsa's 'exacting standards' as a challenge when trying to bring in players. The CEO's latest explanation of their transfer strategy has logic to it, but it won't wash with a lot of supporters, especially now. The chase for Brenden Aaronson is a complicated one to complete, adding to the difficulty facing the Elland Road decision makers. It's hard to look at the squad and consider if sufficient.

This was Newcastle's second win of the Premier League season. The only other side they have beaten is Burnley. Leeds were staring at a golden opportunity and it passed them by completely.

After that crazy end-to-end phase of play was complete, and Leeds hadn't managed to kill Newcastle off, they rarely looked capable of it. Instead the visitors were dangerous on the break and having taken the lead, should have put the game to bed.