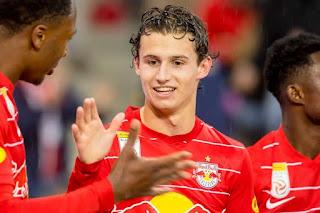 Leeds United have had a £15 million offer for US men’s national team forward Brenden Aaronson rejected by Red Bull Salzburg, The Athletic understands.

The club remain intent on signing the forward despite their first offer being rejected.

Aaronson, 21 has three goals and seven assists in 26 appearances across all competitions this season for Salzburg, who lead the Austrian Bundesliga by 14 points.

He has 10 goals and 12 assists in in all competitions since signing for Salzburg from Philadelphia Union last January.

An afterthought on the international level at the start of 2021, Aaronson has fought his way into the United States set-up. He has two goals and one assist in World Cup qualifying and is one of just two American players along with RB Leipzig midfielder Tyler Adams to appear in all eight matches thus far in the CONCACAF Octagonal.

He is expected to be a part of the US team for their upcoming qualifiers at the end of the month.

RB Leipzig and AC Milan have also been linked with Aaronson.

What could Aaronson bring to Leeds?

Though he primarily plays as a winger for the USMNT, Aaronson, an incredibly active player known for his endurance, quickness and pressing ability, has lined up mainly in a central role during his club career.

A source confirmed that Leeds see him playing in an attacking midfield role, should they be able to acquire him from Austria.

How likely are Salzburg to sell?

Historically, Salzburg has rarely hesitated to sell players, even in January, but the team’s upcoming Champions League clash against Bayern Munich and Aaronson’s key role in the squad could make this potential deal slightly more complicated than other transfers in previous seasons.

Leeds are still determined to sign him in January,

What does this mean for the Philadelphia Union?

A product of the Philadelphia Union academy, Aaronson turned pro with his hometown club ahead of the 2019 MLS season.

He recorded seven goals and nine assists in 54 regular season and playoff appearances with Philadelphia and was named in the MLS Best XI for the 2020 season.

Philadelphia will reportedly receive between 10 and 20 per cent of any transfer fee Salzburg is paid, with the exact percentage dependent on the size of the fee.