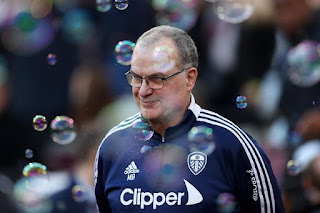 Winning at West Ham would have been a terrific achievement at the best of times.

Boss David Moyes has turned the Irons into genuinely one of the best teams in the division and another victory for the Hammers would have taken the London outfit just three points behind third-placed Chelsea.

Yet Marcelo Bielsa’s Leeds United side managed to record easily one of their most impressive victories so far despite finishing Sunday’s contest with 12 players out either injured or suspended.

A terrific victory in the most difficult of circumstances has now put the Whites nine points clear of the drop zone but, on this evidence, Leeds ought to be looking at the top half of the table and not the bottom, as and when the huge amount of injuries is resolved.

That’s not to say that anybody will be getting carried away whatsoever with what was, ultimately, still only United’s fifth victory of the season.

But, despite having basically a full team out, this was no smash-and-grab success but, instead, a reminder of just what Bielsa’s side can do when everything clicks into place, the Whites having 53 per cent of the game’s possession and 18 attempts at goal compared to West Ham’s 15, both sides having five on target.

Everything certainly clicked into place for Jack Harrison whose first-ever professional football hat-trick means the winger has now gone from 15 league games without a goal to knocking in four in his last three.

His first of the season came in the new-year victory against Burnley which was a vital success in kicking clear of a team in trouble in the drop zone.

This was altogether very different and a success against a side flying high at the other end of the table which made the victory all the sweeter, especially given the injuries.

Summerville was also missing when it came to the unveiling of the teams for yesterday’s contest for which there was once again no sight of Whites No 9 Patrick Bamford.

Striker Patrick Bamford was due to start last weekend’s FA Cup clash at the Irons having recovered from the hamstring injury that he suffered celebrating his equaliser in December’s 2-2 draw at home to Brentford but found himself back on the sidelines after picking up an injury below his hip in training.

Bielsa was at least able to welcome back key duo Pascal Struijk and Rodrigo from injuries but Diego Llorente’s one-match ban for amassing five yellow cards meant Bielsa was still without 10 players including Summerville and 10 then became 12 after a new double-injury blow with a quarter of the contest gone.

It could be argued that Leeds were actually without 13 players given Cody Drameh's recent loan switch to Cardiff City, something which Bielsa had not planned for until the defender expressed a desire to complete the switch to the Bluebirds.

It meant United were already without a full team at the London Stadium, even without Adam Forshaw and Junior Firpo both pulling up injured just after the 20-minute marker.

Both needed replacing as young duo Leo Hjelde and Lewis Bate were brought on when Leeds were 1-0 up through Harrison’s opener.

Leeds had begun very much on the front foot but the Hammers began to turn the tide and it was no real surprise given the way the contest was progressing that the hosts equalised through Jarrod Bowen 11 minutes before the break.

Yet, even with 12 players now out, Leeds showed both terrific fight and attacking endeavour to go back ahead twice and both times through Harrison either side of the Pablo Fornals equaliser seven minutes after the break.

Better still, the Whites should have had a fourth goal via Mateusz Klich’s cool finish from Raphinha’s delightful pull-back, only for the dreaded VAR to become involved, somehow deciding that the strike should be ruled out owing to the shot, which was quite clearly going in anyway, hitting Rodrigo’s backside on the goal line.

Prior to kick-off, getting anything at West Ham looked like an incredibly tall order but especially after more VAR heartbreak, anything other than a full three -point haul would have been a huge kick in the teeth.

That’s what Leeds looked to be heading for as a Michail Antonio cross sailed towards an unmarked Bowen in the 94th minute.

Yet somehow the thriving forward, who is probably heading for an England call, chested his effort over and it meant that, undoubtedly, one of the most impressive and also exciting victories of the Bielsa era was complete, Struijk also particularly immense on his return to the defence and Raphinha a menace.

In a way, it felt a bit like the 3-2 victory at Aston Villa of December 2018 in which Kemar Roofe hit a dramatic late winner as part of a season in which United suffered late heartache via defeat in the play-offs.

Even amidst a huge injury pile-up and tough recent times, this Leeds United side are a different breed and Sunday’s thrilling success against the fourth-best team in the country was a timely reminder of proving it.