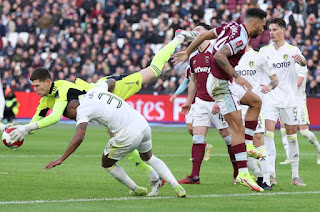 Leeds United have finally received some welcome good news on the fitness and injury front.

The two players collided as Leeds looked to clear a high ball towards the end of the first half but both eventually got to their feet and played on.

Firpo, though, said he then felt dizzy soon after receiving the knock to the head and the defender was eventually substituted for Cody Drameh in the 69th minute.

Young Leeds forward Sam Greenwood also picked up an injury during the Irons cup clash and Leeds were looking at the possibility of having 12 players out for this Sunday's Premier League rematch at West Ham for which centre-back Diego Llorente is also suspended.

Firpo, though, has provided the Whites with some welcome relief, revealing that he is fine to face the Hammers this weekend after following the game's necessary protocols for concussion.

"We have just followed the protocols about these types of things in a game but I feel good. I am fit. I am okay."

Asked what happened in the incident with Meslier and if he had ever experienced a spate of injuries such as what Leeds are experiencing, Firpo said: "After, a few minutes later, I felt a little bit dizzy and in this condition you cannot play a game at this level because it's difficult.

"We don't need any more injuries at the moment."

"I have never experienced it. I don't know what is happening."