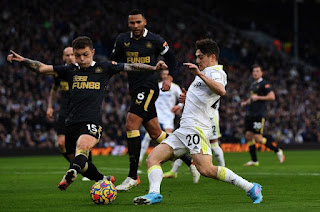 Meslier: Made a strong and important save to keep out Shelvey's blistering first-half volley, but unfortunately the game was decided by his mistake in the second half - in failing to keep out an effort from the same player. 5.

Ayling: Steady enough in his defensive work although could not make a mark going forward. 6

Llorente: Tidied up nicely enough and produced an orderly performance in the main. But his foul led to the breakthrough. 7

Struijk: Kept Wood quiet and made a key block to deny Saint-Maximin in second half. 6

Dallas: In the wars with an elbow injury just before the break but soldiered on as he does. Did plenty right as per. Typical Dallas. 7

Koch: Operated in midfield once again and held his ground well enough. 6

Raphinha: Got into the game after a quiet start and looked like he fancied it against Dummett at times. Not vintage, mind by his high standards. 6

Klich: Quiet first half and could not impose himself in an attacking sense. Got more involved after. 6

Rodrigo: One lovely pass with the outside of his feet was a highlight and produced some nice contributions and had one decent first-half chance cutting inside. But Leeds needed more. 6

Harrison: Heavily involved early on and looked up for it. Final option let him down - he was not alone. 6

James: Effort could not be denied and produced some brilliant covering work to deny Saint-Maximin at the other hand. But looked what he is - a winger being asked to play at centre-forward. 6