Showing posts from September, 2012
Show All

- September 30, 2012
Daily Star 30/9/12 By Adrian Stiles MIDDLE EAST company GFH Capital are facing more frustration as they bid to seal their £52million buy-out of Leeds. The Bahrain investment firm believed they were close to completing a takeover of the Yorkshire outfit after talks with United owner Ken Bates last week. But now they are in a fight to see off potential challenges in their bid to seize control of the Championship club by buying up Bates’ 72.85 per cent stake. The sale has stalled because would-be buyers from Saudi Arabia and the United States are poised. There was growing confidence that the deal between Bates and GFH Capital was about to be finalised. But now there is a very real prospect of counter offers surfacing following the appearance of American investors in the Elland Road directors’ box at the Championship clash with Yorkshire rivals Hull 12 days ago.
Read more

Concerns over funding plans for Leeds

- September 30, 2012
The National 30/9/12 Duncan Castles Concerns have been raised about the funding model for GFH Capital's proposed acquisition of Leeds United. The Bahrain-based equity investor, whose parent bank Gulf Finance House has posted a series of troubled annual reports, has declined to explain how it intends to finance a takeover of the Championship club. GFH "had accumulated losses of $300.69million contractual obligations...and its current contractual obligations exceeded its liquid assets", according to a May 14 letter from the group's auditors, KPMG. While GFH Capital, a 100 per cent subsidiary, is a separate legal entity with its own funds and balance sheet, there are fears it is planning to purchase Leeds with debt that could be subsequently shifted to the club's balance sheet - an approach used in several high-profile foreign takeovers including Manchester United and Liverpool. Leeds chairman and majority shareholder Ken Bates has been involved in dis
Read more 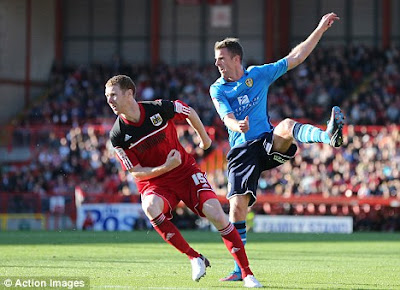 Mail 29/9/12 El-Hadji Diouf's second-half double helped Leeds register their third straight win and back-to-back successes in the npower Championship. The controversial Senegalese striker raised eyebrows when teaming up with Leeds manager Neil Warnock in the summer, but has been grabbing the attention for all the right reasons in recent weeks. Diouf, instrumental in the Yorkshire side's midweek Capital One Cup win over Everton, opened the scoring just after the hour, and although Albert Adomah equalised, he struck again nine minutes from time as Leeds regained the lead. Midfielder Michael Tonge's thunderbolt clinched Leeds a two-goal advantage with seven minutes remaining and although Adomah's corner deflected off Leeds defender Sam Byram in the 90th minute for an own goal, Warnock's men saw out the remaining minute. City were dealt a blow just before half-time when defender George Elokobi, making his debut after signing on loan from Wolves on Wednesday
Read more

- September 29, 2012
Scratching Shed 29/9/12 TimPM Investment banks, slowly slurping the lifeblood from a club. To many fans , an investment group purchasing their club would be a nightmare, but this is perhaps too simple. To Leeds, the proposed marriage to GFH Capital might just be a happy one. Investment banks want something back, and that’s why many fans are rightly wary. A few millions draining annually from a club, especially in the Championship, can cripple an otherwise competitive side. Leeds’ poorly timed capital projects highlighted this. But there’s no evidence that GFH Capital will behave in this way – in fact their press release suggests an early stage of significant investment in the side, getting Leeds to the promised land of the Premier League. It’s easily said, not so easily done. Leicester, Bristol City, Nottingham Forest – several clubs have found this. But Leeds is a club too big for the Championship, of that make no mistake. In terms of reputation, every pundit you’ll meet says
Read more

- September 29, 2012
Yorkshire Evening Post 29/9/12 By Phil Hay The blurb on the website of Gulf Finance House (GFH) has all the watchwords expected of a company’s personal profile: innovative, dynamic, high-value. In every sense that is what a reputable investment bank aspires to be. Its mention of money is not coy either. According to GFH it has raised and invested some five billion US dollars in schemes in the Gulf region and beyond. The bank says it has a “track record and specialisation in creating new financial institutions and the conception of high value economic infrastructure projects.” So far so good from the point of view of Leeds United. The organisation behind the only confirmed bid to buy the Elland Road club comes with promises of cash, vision and innovation. But what do others say about it and what is the independent view of this Bahraini banking institution? Earlier this year, KPMG – the consultancy firm responsible for managing Leeds United’s administration in 2007 – audited GF
Read more

GFH Capital 28/9/12 Dubai, 27th September 2012. Following the recent announcement confirming its signing of an exclusive agreement to lead and arrange the acquisition of Leeds City Holdings including Leeds United FC from current owners, GFH (Capital), which continues its acquisition talks, has begun working on its future strategies for the club. Its intentions, if successful in its acquisition, is to move the club back to the Premier League as quickly as possible and help to build a sustainable future for the club, both on and off the field. This is expected to not only benefit the club and the surrounding community, but also the entire city of Leeds. GFH (Capital) CEO and Board Member, Hisham Alrayes commented: "Like many around the world, people from Bahrain and across the Gulf are passionate about the game of football and notably, English clubs - their successes and hardships are a daily talking point. In so many instances this is what bridges the g
Read more
More posts