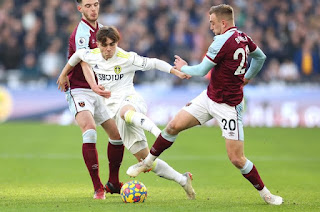 Lewis Bate has hailed the role of Leeds United's senior stars after taking his first steps in the Premier League.

Lewis Bate has hailed the role of Leeds United's senior stars after taking his first steps in the Premier League.

The 19-year-old made his top flight bow in tricky circumstances earlier this month at West Ham - a week on from his senior debut against the Hammers in FA Cup action.

Bate was a first half substitute as Marcelo Bielsa's side were dealt a double injury blow at the London Stadium.

He completed 43 minutes before later being replaced himself in the stunning 3-2 victory for Leeds in the capital, a game that will live long in his memory.

"Especially representing Leeds in the Premier League, it's a special feeling. Even from outside Leeds, everyone knows the training's hard but the senior players have helped us through it every step of the way when we've needed help, and when we've been around the first-team they've guided and supported us."

Bate has been a regular in Mark Jackson's Under-23s outfit since making the move from Chelsea in the summer.

He has now experienced playing in front of a packed stadium on-pitch and from the bench, believing the Whites support to be among the best he has seen.

"It's the same wherever they go, to be honest with you," Bate added of United's raucous following.

"I remember being on the bench against Arsenal at home, we lost the game 4-1 but in the 90th minute we had about 30,000 singing 'We love Leeds' - I don't think it's like that at any other club, it's unique.

"They're always the loudest wherever they go and the most supportive. They're unbelievable."