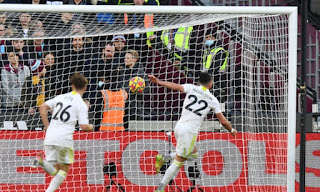 Jacob Steinberg at the London Stadium

This wildly entertaining contest was a good advert for playing on. Although Leeds United resembled the walking wounded at times, they have set the standard for the rest of the Premier League to follow. Cry off because of a draining injury list? Not a chance with Marcelo Bielsa in charge.

As ever, the Argentinian stands apart as something different in English football. For all his side’s naive tendencies, there is a purity to Leeds under Bielsa’s watch. They have battled on with a lengthy injury list all season and diced with danger throughout, but deserved victory. Raphinha was superb and Jack Harrison’s hat-trick moved Leeds nine points clear of the bottom three.

West Ham, whose resources were also stretched by injuries, ran out of steam. They had Michail Antonio playing as an auxiliary wing-back during the dying stages and it seemed that playing three games in a week had caught up with them. They defended poorly and will rue missing an opportunity to pull clear of Arsenal and Tottenham.

Leeds, who were without key players such as Diego Llorente, Liam Cooper, Patrick Bamford and Kalvin Phillips, did not have time to feel sorry for themselves. There was no attempt to get the game postponed, even though they were missing nine players and had to fill their bench with academy players. It was simply a case of getting on with the job and that refusal to down tools looked like a smart move when Leeds took control of the early stages, hogging the ball and surprising West Ham with the speed of their passing and movement.

Too open in midfield without Tomas Soucek, who was still in quarantine, there was a vulnerability to West Ham. The hosts barely had a touch at first and could have no complaints when a silky run from Raphinha, who had beaten Aaron Cresswell to a long ball down the right flank, led to Harrison sweeping Leeds into a deserved lead.

Slow to react to the danger, West Ham were all over the place as Raphinha found Mateusz Klich. The midfielder aimed a shot towards the far corner and although Lukasz Fabianski pushed it away, the goalkeeper was helpless when Adam Forshaw collected the rebound and teed up Harrison. The winger’s finish left no room for any debate and West Ham had a problem on their hands.

Moyes must have been concerned about his side’s sluggishness. Leeds could have doubled their lead when Dan James fired over and there was always a sense that the visitors fancied their chances of hurting Issa Diop and Craig Dawson, an unconvincing duo at the heart of West Ham’s defence.

Gradually, though, West Ham began to impose themselves. Pascal Struijk made a vital block from Antonio, who was fortunate only to be booked for a wild challenge on Robin Koch, and Bielsa’s problems increased when Forshaw and Junior Firpo limped off midway through the opening period, although there was something admirable about Leeds’s fearlessness in the face of adversity. They had named a 15-year-old, Archie Gray, on the bench and Bielsa’s response to losing Forshaw and Firpo was to introduce two teenagers; something, perhaps, for the Premier League’s board to consider the next time a club asks for a postponement.

That said, there was more of a skittishness to Leeds after Lewis Bate and Leo Hjelde entered the fray. Weaknesses at set-pieces were an issue. Cresswell had already swung in one corner for Dawson to nod wide from close range and there was no reprieve for Leeds when the left-back whipped in another delivery, Bowen losing Stuart Dallas and heading past Illan Meslier for his ninth goal of the season.

Panic over? Not quite. Leeds were ahead again three minutes later. Raphinha swung in a corner from the left, Luke Ayling attacked it and Harrison took advantage of dreadful marking by bundling the ball in at the far post.

By now, the game had become comically stretched. Declan Rice screwed a shot wide after running through on goal and James was wasteful at the other end, shooting straight at Fabianski after another error from Dawson.

Leeds would regret not extending their advantage before the break. West Ham emerged for the second half with more intent, Rice firing over, and they levelled again when Antonio made up for a poor touch by releasing Pablo Fornals, who deceived Meslier with a clever finish.

Again, though, Leeds simply dusted themselves down. Dallas was inches away from restoring their lead and West Ham looked uncomfortable whenever Bielsa’s players pressed them. Manuel Lanzini was overwhelmed in central midfield, where the absence of Soucek left Rice with too many fires to extinguish, and the pressure told when the lethargic Nikola Vlasic was dispossessed by Klich in the 60th minute.

West Ham were in trouble when the ball broke to Raphinha. The Brazilian, who would later crash a free-kick against the post, spotted a huge gap to his left and freed Harrison, who lifted his shot over Fabianski.

It was no more than Leeds deserved. They would not be denied, even though Klich was unlucky to have a goal ruled out for offside after more brilliance from Raphinha. West Ham, who were also frustrated when Andriy Yarmolenko had a late equaliser disallowed for offside, would miss a glorious chance to equalise in added time when Bowen chested over from close range.