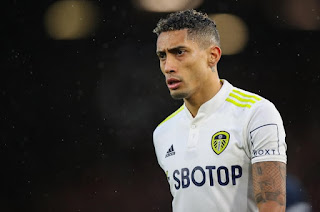 Marcelo Bielsa says it is a "great decision" from Leeds United to open contract talks with Raphinha.

The 25-year-old Brazil star has been a standout performer in the Premier League since joining the Elland Road club from Stade Rennes in October 2020.

He penned an initial four-year deal in West Yorkshire upon his arrival for around £17million a year and a half ago and is now in discussions with Leeds over extending his current deal.

Raphinha has been the subject of transfer talk across Europe in recent months though the Whites have no intention of selling their key winger in the current January window.

His agent and former Barcelona man Deco was spotted in LS11 last month amid intentions from Leeds to land a new deal.

Bielsa has welcomed the move amid heaping high praise on the tricky wide man, who has broken into the Brazil international setup since arriving to the top flight.

“I think it is a great decision. Raphinha is the best player in the team in all the senses," Bielsa said of the Selecao star.

"Physically, he is the best, technically he is at the level of the best and the interpretation that he has of the game is very good, very wise.

"He is within the group of such a powerful nation as Brazil. He shines in the Premier League and he has the attention of all the big clubs in the world.

"All of those things are something that you guys know as much as me, nothing that I am saying is new. As a result, the decision of the club can only be valued.”