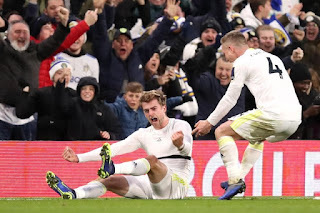 Leeds' top goalscorer in both their promotion season and first campaign back in the Premier League, Bamford has been a big miss this season. He injured his ankle against Newcastle United in September and although he returned as a second half substitute to score against Brentford at the start of December, his goal celebrations led to a hamstring problem.

Bielsa was hopeful of having his striker back for the games against West Ham United but Leeds opted not to risk him. Bamford has now missed 16 of the Whites' 22 Premier League fixtures this season and his absence looks set to continue.

He, along with Adam Forshaw and Junior Firpo, are among the players Bielsa will be missing this weekend.

"Forshaw and Firpo have musclar injuries and Bamford has a new injury at the bottom of his foot," said the head coach.

"He's overcome his muscular problems but now he's got an issue at the bottom of his foot."

Leeds' injury list has, for weeks on end, been extensive. Joe Gelhardt suffered an ankle injury when a team-mate fell on him during a training session ahead of the FA Cup game against the Hammers, while Tyler Roberts went off against Burnley with a calf problem and Sam Greenwood picked up a knock in the cup at the London Stadium.

Bielsa does have Gelhardt and Roberts available this weekend, however, to join Rodrigo among the attacking options.

Kalvin Phillips and Liam Cooper are not expected to return before March according to Bielsa, while Jamie Shackleton has been out for a month with an Achilles problem and Charlie Cresswell has a shoulder injury, sustained in a training-ground collision.

The latest victims were claimed in last Sunday's game against the Hammers and they both limped off with hamstring injuries within the space of a minute or so. Forshaw and Firpo left the field to be replaced by Lewis Bate and Leo Hjelde, a pair of Premier League debutants.