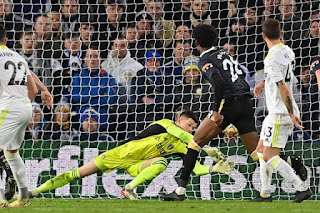 Leeds United's bid to record a third consecutive Premier League triumph came to an abrupt halt as Newcastle United won for only the second time this season via Saturday's 1-0 victory at Elland Road.

Leeds squandered several good chances to go in front and were undone in the 75th minute as Jonjo Shelvey's low free-kick from the edge of the area sailed through the Whites area and past Illan Meslier with the help of a slight Magpies touch in the box.

In winning for only the second time this season, Newcastle brought themselves seven points behind the Whites who stay 15th, seven points clear of the drop zone.

Newcastle served up the game's first opening in the fourth minute but Joelinton could only scoop an effort well over the bar from just inside the box.

A few minutes later, a hooked shot from Chris Wood was deflected behind for a corner.

But Leeds created a fine opening in the 11th minute as lovely footwork from Rodrigo and then a Raphinha pull back worked an opening for Dan James whose attempt was palmed away by Martin Dubravka at his near post.

Back came the Magpies as Allan Saint-Maximin twisted and turned on the edge of the box before dragging a shot wide but a lovely backheel from Luke Ayling then set up Mateusz Klich who flashed a shot across goal.

From a Whites corner, Raphinha sent a curler wide from the edge of the box and after another lovely Rodrigo pass, Harrison's cross was deflected to Raphinha whose header was blocked.

After Leeds failed to clear to work their way out of defence, Ryan Fraser's effort was deflected behind for a corner which was then headed out to Shelvey whose bullet of a shot was well beaten away by Meslier.

Raphinha then skinned Paul Dummett to make his way into the area but his cross trickled through the box before Newcastle cleared.

Moments later, Rodrigo stormed into the area but his firm effort was deflected behind for a corner from which a Raphinha shot was also blocked and Newcastle countered only for James to mop up at the back.

Newecastle then lost Joelinton to injury, Sean Longstaff taking his place, and Leeds then survived a late first-half flurry of Magpies pressure although the opening period ended with a half chance for Leeds, Robin Koch heading over after a Raphinha cross was cleared.

Neither side made any changes during the interval and Leeds threatened six minutes after the start as terrific work from Llorente paved the way for James to storm into the box and fire just wide.

From a cleared Harrison cross, Koch's volley from a tight angle was easily saved but at the other end Saint-Maximin cut in from the left and saw a fierce shot blocked.

The contest was becoming increasingly stretched and the Magpies then lost Dummett to injury, Javier Manquillo brought on as their second change.

Leeds then squandered a glorious chance in the 67th minute as Rodrigo and Raphinha combined to set away Harrison whose shot deflected to James who skewed his shot on the stretch from close range.

The Magpies then lost a third player to injury, this time captain Jamaal Lascelles unable to continue and replaced by Ciaran Clark.

James was then taken off for Tyler Roberts with 19 minutes left but a rapid Magpies counter ended with Longstaff blasting a shot just wide.

Llorente was penalised for pulling down Manquillo as he looked to go past the defender and Shelvey sent in a low effort that sailed through the area and past Meslier via a slight deflection into the bottom right corner.

The visitors then went close to doubling their lead as Frazer got in behind and his low cross was spilled by Meslier before Llorente cleared.

Bielsa then finally called for Joe Gelhardt with ten minutes left as Klich made way but United wasted a potential opening with eight minutes left as Rodrigo sent cross/shot over and wide from the edge of the box.

After fine skill from Gelhardt, Koch's attempt from the edge of the box was deflected wide but the Magpies squandered a good chance to double their lead moments later as Saint-Maximin played in Fraser who could only roll an attempt wide.

Leeds then had five minutes added time to bag a leveller but the Magpies threatened again as Wood's strike from the edge of the box was deflected over and only a fine save from Meslier denied Willock in the 93rd minute.