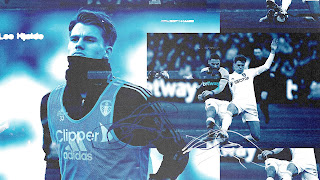 I hate how we lose every time we go there, I hate how VAR seems to enter some alternate dimension there, and I hate how you can hear a cockney accent in every chant they manage to force out (usually the same one three times a game).

You know what I don’t hate? Promising young centre-backs.

On a day with little to celebrate from a Leeds perspective — more VAR controversy, another third round FA Cup exit, injuries piling up to the point we can legitimately refer to a hillock — there were two bright sparks, in the form of debutants Lewis Bate and Leo Hjelde.

Bate, to his credit, deserves his own write-up: an extremely efficient display, barking out orders and demanding the ball from players with much more experience, before he was (unfairly?) taken off at half-time for Stuart Dallas. His confidence was evident in the way he took on two difficult efforts in his 45 minutes of fame: a curling shot from the edge of the area, and a dropping ball he planned to volley, crisply, back into the top corner. Neither came close to going in, granted, but it’s the cojones to give it a go that I like. Vamos, kid. Very good.

Much as I could blather about young Lewis, my attention was drawn to the fresh-faced behemoth behind him in central defence. Looking as if he’d stepped out of Skyrim, yet just eighteen years old, Leo Fuhr Hjelde was handed a fear-inducing task on top of the pressure of his first-team debut: handling Michail Antonio. It’s a task many defenders of many differing experience levels have been given, and one that many have come away from with severely bruised egos. Antonio, like much of the West Ham team, is a man playing at the top of his game, confident in his ability and the players around him. Not exactly the kind of individual you want to be facing when your last senior game was for Ross County last May. Though this game ended 2-0 to the hosts, and Antonio impressed as he often does, it would be plain wrong to point at Hjelde as the culpable party. In fact, by the end of Hjelde’s time on the pitch, Antonio was noticeably focusing more on Diego Llorente than his teenage colleague. All things considered, and taken off with just under fifteen minutes to go, the Nottingham-born Norwegian did good. Damn good, to be precise.

Two interceptions, four clearances, 66 passes (second only to Llorente and eleven more than any West Ham player, although he did bump up Meslier’s ‘passes received’ stats at the same time), with a couple of fouls sprinkled in for good measure. The stats don’t tell everything, but they give a clear indication of how involved Hjelde was. This wasn’t the kind of youth introduction we’ve seen from Bielsa in the past, when risks are minimised and players are clearly instructed to play it safe until they’ve found their footing. This was in at the deep end and let’s see if you can keep yourself afloat. Also there are sharks. And we’ve turned the lights off.

Hjelde even played a huge part in the ‘goal’ West Ham ‘scored’ in the first half. After receiving Antonio’s pass, it looked as if Nikola Vlasic had left his young marker for dead. The folly of youth. But Hjelde stuck to him, somehow, with the kind of dogged determination that could prove useful in the second half of this season. As Vlasic shaped to shoot, the path to goal was obstructed by a wall with blonde hair. It was a fantastic tackle, last gasp, perfectly timed, and absolutely necessary. It was the kind of tackle that, nine times out of ten, a seasoned pro gets wrong. What’s more, it meant Jarrod Bowen, who attempted to make a play on the loose ball, was left offside, giving the VAR team an easy decision to disallow the goal that followed. They skied that one over the bar, through no fault of Hjelde’s.

The disappointment of the goal aside, there was so much more to enjoy about Hjelde’s performance than that one tackle. Driving into midfield on more than one occasion, something Bielsa likes his defenders to do but isn’t simple, took confidence on the ball. His physicality, unafraid to mix it with a seasoned fighter like Antonio, emphasised his attitude. This isn’t a shrinking violet we’re dealing with; he had no problem showing anyone in claret and blue who he was. At times he was a little naïve, sticking too close to a striker who knows every trick in the book, but he got the better of Antonio more than once, and you could see the effect as West Ham’s number 30 diverted his attention to the other side of the Leeds backline.

With both Liam Cooper and Pascal Struijk sidelined, and Robin Koch required as cover for Kalvin Phillips, it won’t be a shock if Hjelde is back in the team soon, perhaps even returning to the London Stadium at the weekend. With that in mind, it would be typical of Leeds fans (with me the prime example, I’m aware) to expect too much of young Hjelde. One good performance does not a player make, and praise can very quickly turn to criticism in this game, but it’s hard not to be excited about a debut like the one we saw on Sunday. The game may have ended in defeat, but Hjelde can hold his head high, even receiving a rare moment of recognition from a coach who tends to keep his platitudes away from the cameras.

It’s not every day you get a high five from Marcelo Bielsa.