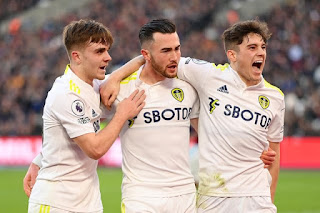 Leeds went ahead in the tenth minute as Harrison finished off a fine move after Mateusz Klich's attempt had been saved.

The Whites then lost both Adam Forshaw and Junior Firpo to injury around the quarter mark and the Irons drew level 11 minutes before the break when Jarrod Bowen headed home a corner.

United went back ahead just three minutes later as Harrison doubled his tally by netting from close range from a Raphinha corner.

The Irons levelled for a second time in the 52nd minute as Michail Antonio's flick released Pablo Fornals who cut inside and beat Illan Meslier with a low finish.

Yet Leeds went back ahead on the hour mark as Harrison completed a superb hat-trick when slotting home after Raphinha's through ball.

The Whites were then denied a fourth as Klich's strike was disallowed by VAR for offside after hitting Rodrigo practically on the line but in the end Harrison's treble was enough for a memorable success.

Leeds threatened in the fourth minute when a Raphinha free-kick was headed wide by Luke Ayling.

A couple of minutes later, a nice move ended with Harrison twisting and turning at the far post and seeing his shot deflected wide for a corner that the Irons cleared.

The Whites had started brightly and went ahead in tenth minute as Harrison finished a fine move after Klich's shot had been saved by Lukasz Fabianski but only parried to Adam Forshaw who coolly set up Harrison to convert.

Leeds then held firm as the Hammers looked to hit straight back and United went close to bagging a second a few minutes later as Dan James fired over from the edge of the box.

But Leeds were then dealt a double hammer blow as both Adam Forshaw and Junior Firpo pulled up injured, the duo both having to be replaced as Lewis Bate and Leo Hjelde were introduced.

A brilliant block from Stuart Dallas then kept out a drive from Antonio from inside the box and Craig Dawson then missed a sitter when putting a free header wide from about four yards out.

But the Irons drew level 11 minutes before the break when netting with a similar chance, Jarrod Bowen losing Dallas at a corner and thumping home a header from close range.

Leeds, though, went back ahead just three minutes later as a corner from Raphinha was flicked goalwards by Ayling and Harrison ran in to convert from close range with his thigh.

The Whites threatened again shortly afterwards as James headed over from the edge of the box but back came the Hammers, Declan Rice played in and rounding Illan Meslier only to fire his effort from a tight angle into the side netting.

Bowen then lost Dallas again from another corner but headed over but Leeds squandered a glorious chance to bag a third in first half stoppage time as Raphinha played in James who had just Fabianaski to beat but saw a weak rising effort easily saved.

Even then there was time for one more chance, James cutting in from the left and sending a fine effort just wide of the opposite post.

West Ham began the second half brightly and Antonio played in Rice who fired over the bar but the Irons equalised in the 52nd minute when Antonio's flick released Fornals who cut inside and fired a low finish past Struijk and Meslier.

Back came Leeds and a Harrison cross flew through the area with first James and then Dallas just unable to find the right connection to convert.

Yet incredibly Leeds hit back once again and once again through Harrison who coolly slotted home from the middle of the box after a brilliant through ball from Raphinha and initial excellent tackle from Dallas.

The woodwork then denied the Whites a fourth moments later as Raphinha's free-kick crashed back off the top of the post and James headed the rebound over.

Bielsa then made a third and final change in the 65th minute as record signing Rodrigo returned from injury to replace substitute Bate.

United continued to attack and Rodrigo saw a shot from inside the area blocked but Leeds looked to have bagged a fourth goal in the 74th minute when Raphinha brilliantly made his way to the byline and sent back a perfect cut back for Klich who slotted home a finish from the middle of the box.

But the ball hit Rodrigo practically on the line before going in and VAR intervened to disallow the goal for offside.

The Hammers then looked to have drawn level yet again in the 82nd minute as substitute Andriy Yarmolenko headed home from close range but Bowen had been flagged offside.

The Irons then saw shouts for a penalty waved away for what they felt was handball and the hosts were given four added minutes to try and find a third leveller.

A good chance then fell to Yarmolenko whose effort from the edge of the box was held held by Meslier.

In one final attack, the Irons looked destined to make it 3-3 as Antonio's cross picked out an unmarked Bowen but in in form-forward could only chest his attempt over the bar.