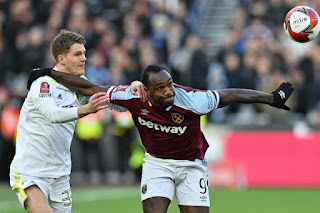 West Ham away was looking tough enough as it was with eight players out.

Eight then became nine, Patrick Bamford not part of the matchday squad and Whites head coach Marcelo Bielsa later revealing that the striker had picked up an injury just below his hip in training.

Add in a baffling dose of VAR dismay and some wasteful finishing and United’s FA Cup clash against the Hammers proved too much of a difficult task.

For the fifth year in a row, Leeds United are out of the famous cup competition at the first fence, once again departing in the third round.

But Sunday’s defeat was no Newport County or Crawley Town and the biggest takeaway surrounds yet more promise shown by Whites youngsters.

Three of United’s under-23s stars were handed their big chance in yesterday’s assignment which had Bielsa facing a difficult task in selecting a strong enough side but equally whilst looking to avoid repercussions upon next weekend’s Premier League rematch.

In the end, it meant the likes of Raphinha, Stuart Dallas and Adam Forshaw dropping to the bench as young talents Leo Hjelde, Lewis Bate and Sam Greenwood were all handed their first Leeds starts and, in the case of Hjelde and Bate, their Whites debuts.

The trio lined up in a team that still featured plenty of experience and the Leeds line-up only featured four changes to the XI that started out the previous weekend’s Premier League clash at home to Burnley.

But it must be remembered that United already had seven players out for the clash to face the Clarets, Tyler Roberts and Joe Gelhardt since being added to that list.

With West Ham flying high in fifth place in the Premier League table and David Moyes naming a strong side that included the likes of Declan Rice and Michail Antonio, United’s 2022 third-round assignment looked very hard indeed and a particularly tough baptism of fire for the club’s youngsters.

Yet all three performed with great credit which once again showed that the long-term future at Leeds looks very bright, particularly when you consider that the brightest star of all in the youngsters department in Gelhardt was out injured.

Hjelde in particular produced a very taking display at centre-back in attempting to deal with powerhouse striker Antonio and the United recruit from Celtic is already a commanding presence at just 18 years of age.

When it comes to the positives to be taken from Sunday's clash at the London Stadium, the Norwegian defender was the biggest one.

But in the middle of the park, 19-year-old Lewis Bate also showed some decent touches whilst fellow 19-year-old Greenwood again showed flashes of what he can do up front.

The problem for Leeds is that a very head-scratching VAR call had them 1-0 down at the break, albeit the Hammers squandered other very good chances in the first half.

In the contest as a whole, David Moyes’ side served up 17 attempts on goal, seven of which were on target whereas Leeds contributed eight attempts, only two of which tested ’keeper Alphonse Areola, Bate’s effort from the edge of the box and Greenwood’s attempt at a flicked finish from a Jack Harrison cross.

But despite the Hammers repeatedly threatening, Leeds really ought to have got themselves on the scoresheet, Harrison and James sending particularly good opportunities over and wide respectively from close range and several other promising Whites forays forward ending without the creation of a chance.

By the hour mark, Bielsa had called for his last three available big guns as Raphinha, Dallas and then Forshaw were introduced from the bench but the Whites were unable to make a breakthrough, despite two more youngsters in Crysencio Summerville and Cody Drameh also showing more promise after their introductions.

There was no lack of commitment or endeavour but that endeavour then proved United’s undoing as the Hammers bagged a late second on the counter from a Whites corner.

Bielsa felt the Irons were worthy winners and Moyes believed his team were good value for their victory.

Injuries, VAR and missed chances ultimately led to the latest Whites cup exit, but not without positives and the kids look more than all right.