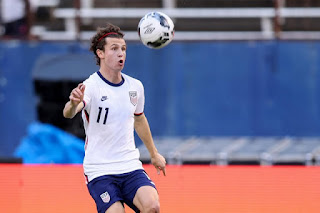 A journalist who has followed the journey of Leeds United target Brenden Aaronson since the midfielder was an academy prospect sees issues with a January move to the Premier League.

The Whites have pushed hard to sign the 21-year-old American this month, making a pair of bids that his club, Red Bull Salzburg, have not accepted. Leeds, who were prepared to go to £20m with their second offer, consider the player such an exciting talent that they'll resume the chase in the summer if they can't get him now. Seeing a future for him at Elland Road and knowing that Salzburg may not be open to a sale this month may come into the Whites' thinking when it comes to a third bid, given that his price tag is not likely to decrease between now and the summer window.

With less than a week to go before the January transfer deadline, Aaronson has joined up with his USMNT colleagues for a trio of World Cup qualifiers against El Salvador, Canada and Honduras.

For The Philadelphia Inquirer's soccer reporter Jonathan Tannenwald, the 2022 World Cup is what makes a potential transfer from Austria to the English top flight problematic.

As the longest-serving member of the Philadelphia Union local press pack, he's been writing about Aaronson since August 2018.

"I knew when I first wrote about him that he had a lot of potential," he told the YEP.

"I get tipped off now and again, a couple of times a year I'll speak to the academy director, Tommy Wilson who came from Rangers, and ask who is coming up. Aaronson was one of them. I started watching him with their reserve team and then he got up to the first team and everyone could see he had a lot of potential."

After two full years in MLS, the second of which was Aaronson's breakout season, he made the move to Europe to join Salzburg in a $6m deal, with $3 in add-ons.

"I thought by then he was ready and it was good to go to a stepping stone place, a club with a long list of players who develop clubs," said Tannenwald.

"You want to go to a place like that for your first club in Europe, have your time in the Champions League to show yourself off and then go to a bigger club. We've seen players go from MLS straight to big teams in Europe and it hasn't always worked out. Matt Miazga is a very famous example. You end up kind of stuck. Aaronson going to Salzburg as his first stop was ideal. Now by playing well, playing in the Champions League, he's been able to show he'll soon be ready for a move to a bigger club."

"It's not anything to do with his talent, it's that in a World Cup year and with the USA having six World Cup qualifiers to go, I don't know that you want to unsettle your club situation right now," he said.

"He's got to be careful that he goes somewhere he will play, so he stays in form for the March qualifiers and then the World Cup in the Autumn, without falling out of rhythm. You've also got the fact that he's about to play in the Champions League against Bayern Munich and Salzburg would very much like to have him there and he'd like to play in those games. I know how big a deal Leeds United are but he's not going to play in the Champions League for Leeds United, not immediately. This moment is a big moment for him."

Tannenwald's concern revolves around the intensity and physicality of the Premier League, something he's not sure Aaronson is ready for.

"You really don't want to suffer a major injury that could knock you off your stride, this year," he said.

"Aaronson is a fabulous player, a great person but he's not the most stocky, powerful guy. He's definitely grown and bulked up since he left Philadelphia - I last talked to him in November ahead of the US-Mexico qualifier and I could tell he had bulked up - but I look at Christian Pulisic and how often he gets injured and I'm a little wary of the timing for Aaronson."

Tannenwald is convinced that a move to Leeds would be 'huge' for Aaronson, the Premier League and their Stateside broadcast partner NBC, not to mention a further boost for the Union and their pathway, but would rather it happen in January 2023 than in the next few days.

"If he's going to make a move right now I might rather it was to Germany. A year from now I think it would be terrific."