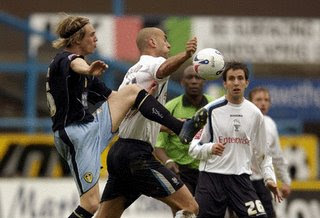 BLACKWELL PLAYS DOWN DEFEAT'S IMPACT By Graham Chase, PA Sport Sporting Life Leeds boss Kevin Blackwell insisted the 2-0 defeat by Preston has no bearing on his team's meeting with them in the Championship play-offs. Goals from Brian Stock and Brett Ormerod either side of half-time at Deepdale ensured the home side finish in fourth and Leeds, who have won once in 10, settle for fifth. The sides will meet again in the first leg of the play-off semi-finals at Elland Road on Friday before the return game at Deepdale on Monday week. Blackwell said: "I put a team out to be competitive and it was so I'm pleased with what I got out of it. "There were a lot of changes but it was for a purpose. It's about just playing the (semi-final) game. The occasion will have to be dealt with in a separate way. "With eight changes, I don't think Billy (Davies) or I will read too much into the result." Blackwell admits he is relieved to have the season out of the way
Read more
- April 29, 2006
JUST PLAY! By PAUL DEWS Yorkshire Evening Post FORGET the maths! That will be Leeds United boss Kevin Blackwell's message to his players when they bring the curtain down on their league campaign at Preston tomorrow. United head for Deepdale knowing a draw or a win will assure them a fourth place finish in the Championship and almost certainly guarantee a play-off semi-final showdown against the same opponents.But Watford and Crystal Palace are also in the play-off mix and tomorrow's results will finally decide who plays who, and when. Leeds boss Blackwell said: "The odds are that we'll play Preston again, but there are so many different permutations. "If we win and Watford lose we could finish third. If we win and Palace win, they could finish fifth, and if we lose and Palace win we could finish fifth or even sixth. "As it stands we could play any one of the three sides in there, and finish anywhere in the top six. But whatever happens, happens – we can't
Read more
- April 22, 2006 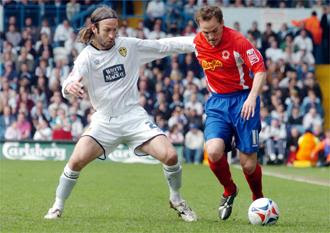 BLACKWELL PRAISE FOR STONE By Ross Heppenstall, PA Sport Sporting Life Leeds boss Kevin Blackwell paid tribute to Steve Stone for bouncing back from a career-threatening injury to make his long-awaited debut in the 1-0 win over Crewe. David Healy's 74th-minute header secured Leeds their first win in nine games at the expense of Dario Gradi's relegated side. But the real boost for Blackwell ahead of their crucial forthcoming Coca-Cola Championship play-off encounters was the second-half appearance of former England winger Stone. The 34-year-old arrived at Elland Road on a free transfer from Portsmouth last summer but sustained an Achilles injury during his first training session. The injury took far longer to heal than Stone could have possibly expected but he is now edging towards full fitness. And having entered the fray shortly after the hour mark, as a replacement for Liam Miller, Blackwell hailed Stone's a painstaking road to recovery. Blackwell said: "He came on
Read more
- April 20, 2006 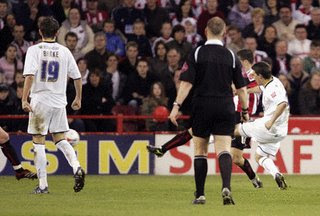 Sheffield United 1 Leeds United 1: Warnock sent off as Blackwell spat resumes By Dan Murphy Published: 19 April 2006 Independent It was billed for months as the game that would finally decide which of these Yorkshire rivals would be automatically promoted to the Premiership. When last night's derby finally arrived there was nothing left for either side to play for - but that did stop not Neil Warnock, the Sheffield United manager, from rather ruining his own promotion party by being sent to the stands by the referee, Graham Poll, after an argument with his former assistant and opposite number Kevin Blackwell. Shaking off the grasp of a policeman, he eventually stormed down the tunnel and only re-emerged for a lap of honour with his team to celebrate the sixth promotion of his career. Warnock, 57, who has previously complained about inexperienced referees taking charge of important Championship matches this season, was incensed by a Gary Kelly challenge that sparked more animosity
Read more
- April 17, 2006
WE'RE UNITED AGAIN Boss Blackwell hails his troops Yorkshire Evening Post By PAUL DEWS LEEDS UNITED boss Kevin Blackwell hailed a great "team effort" on and off the field after his side took a massive stride towards the end-of-the-season play-offs. Blackwell's troops were only denied victory against champions Reading at Elland Road on Saturday by a controversial late equaliser – but the United fans responded to the manager's calls for unity and he was delighted with the togetherness on display. "I was pleased and proud of the players on Saturday," said Blackwell. "And I was thankful to the fans for their support. It makes such a difference when we are all together like that. It really does. It's a massive difference from this time last week. We may not have won, but we didn't lose and look a hard side to beat. Reading are the best side in this league by a country mile and they played their strongest team because they felt it would be a good
Read more
- April 16, 2006 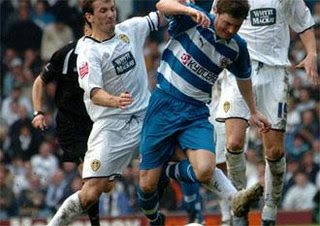 BLACKWELL CONGRATULATES BLADES By Ross Heppenstall, PA Sport Sporting Life Kevin Blackwell paid tribute to Sheffield United after Leeds' 1-1 draw with Reading confirmed the Bramall Lane club's return to the Barclays Premiership. Leeds were required to win against the Coca-Cola Championship title winners to keep alive their faint hopes of pipping the Blades to a second-placed finish. But a solitary point ensured Neil Warnock's men cannot now be caught in the race for automatic promotion. The draw, which saw Reading substitute Stephen Hunt cancel out Rob Hulse's 46th-minute opener, left Leeds fans bitterly disappointed but sparked wild celebrations down the M1 in Sheffield. The Blades, who have been perched in second spot for the vast majority of the season, return to the top-flight after a 12-year exile. And Blackwell, whose side play United at Bramall Lane on Tuesday, said: "I just want to congratulate Sheffield United on a fantastic achievement. "Neil and th
Read more
- April 15, 2006 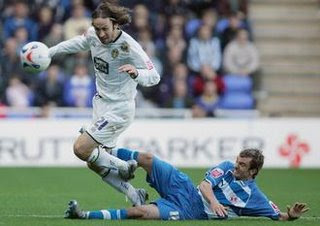 Hunt has Leeds bound for play-offs Sheffield United's promotion to the Premiership was confirmed after Leeds were held 1-1 by Championship champions Reading at Elland Road. Kevin Blackwell's side were required to secure maximum points against the champions to keep alive their faint hopes of pipping the Blades to a second-placed finish. But a solitary point ensured Neil Warnock's men cannot now be caught in the race for automatic promotion. The draw, which saw Reading substitute Stephen Hunt cancel out Rob Hulse's 46th- minute opener, left Leeds fans bitterly disappointed but sparked wild celebrations 34 miles down the M1 in Sheffield. Warnock's men, who have been perched in second spot for the vast majority of the season, are worthy winners of a return to the top-flight after a 12-year exile. They suffered a wobble in recent weeks but Leeds failed to capitalise and ultimately it was the Blades who held their nerve to complete a momentous promotion. Leeds travel to
Read more
- April 14, 2006 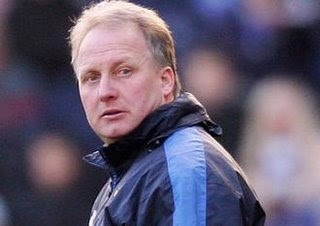 LEEDS CONDEMN BLACKWELL THREATS By Mark Walker, PA Sport Sporting Life Leeds have jumped to the defence of Kevin Blackwell and condemned those responsible for sending the under-fire manager threatening mail. Blackwell has seen his side's automatic promotion challenge fade in recent weeks on the back of just one win in seven matches, while they have failed to score in their last four. Leeds were held to a goalless draw by Plymouth at Elland Road last week, but despite qualifying for the play-offs with four games still to play were booed off the field and Blackwell received disturbing mail this week. The club statement read: "Following the statement made by Kevin Blackwell regarding a threatening letter sent to him, the club believes that this will only serve to strengthen the resolve of everyone to unite behind the club as we enter the final, but most important part of the season. "Leeds United are delighted at the rapid progress the club have made under the management of
Read more
- April 10, 2006 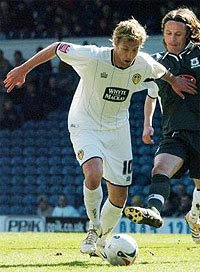 First Objective Met leedsunited.com Kevin Blackwell paid tribute to his players after they secured a place in the play-offs with a point against Plymouth. Although the result was disappointing, a second successive 0-0 draw at home, Blackwell was keen to point out the positives from the game and put it into context of the season as a whole. Leeds have been challenging for promotion since the first few months of the campaign and whilst the grand prize of promotion has yet to be earned, he believes his side deserves to be recognised for their achievements. He said: "I would like to congratulate the players after a hard season for achieving one of the targets we set out to do and that was to get the minimum of a play-off place. "I have to take my hat off to them for the hard work they have done to achieve that. "It's great to look at the league table and see Leeds right up the top there, I think everybody should be proud of that and let's all stick together. I kno
Read more
- April 09, 2006 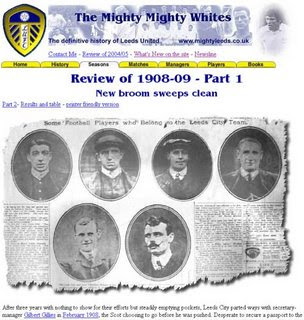 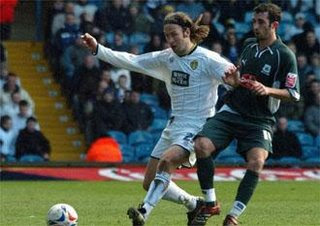 BLACKWELL WON'T THROW IN THE TOWEL By Ross Heppenstall, PA Sport Sporting Life Leeds boss Kevin Blackwell refused to accept his side's automatic promotion hopes are over after they slumped to a goalless draw against Plymouth at Elland Road. Second-placed Sheffield United beat Hull 3-2 at Bramall Lane to move nine points above misfiring Leeds with only four games remaining. Leeds secured a play-off spot but this was the fourth game running without a goal for Blackwell's men and extends their winless streak to six matches. However, Blackwell defiantly declared: "I can't give up on second because it's still possible and there are four games left - we still have a chance of automatic promotion. "The lads worked their socks off today and I want to praise them because they've assured themselves of a play-off place with four games to go. "It's a great achievement for Leeds to be third at this stage of the season - and the lads got booed off - but I
Read more
- April 01, 2006 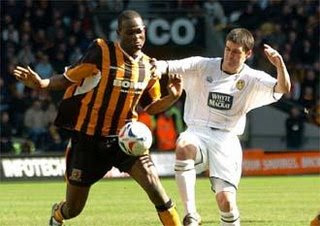 BLACKWELL WON'T GIVE UP YET By Chris Wilson, PA Sport Sporting Life Leeds boss Kevin Blackwell acknowledged his team's prospects of automatic promotion from the Coca-Cola Championship are looking bleak after the 1-0 defeat at Hull. Blackwell's team are now without a league win in five attempts after Jon Parkin's powerful downward header on 76 minutes earned Peter Taylor's men local bragging rights from an engaging Yorkshire derby. The visitors have also failed to find the back of the net in their last three games - a statistic their manager believes is the pivotal factor behind their recent slump. "It's tight at the top at the moment and it's just one of those things," said Blackwell. "We've lost form in the last third of the field but that can come back as quickly as it goes." Sheffield United's hold on second place is looking more secure and Blackwell admitted it is now difficult to see Leeds catching the Blades. "It is no
Read more
- April 01, 2006 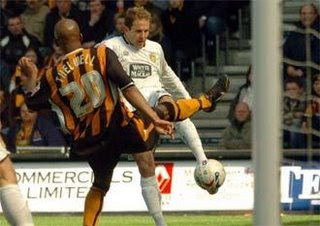 Hull 1 Leeds 0 By Chris Wilson, PA Sport Sporting Life Faltering Leeds are seemingly destined for the Coca-Cola Championship play-offs after this defeat at Hull. Kevin Blackwell's men needed three points from the Yorkshire derby to keep the heat on second-placed Sheffield United, who are now heavily odds-on to secure automatic promotion to the Barclays Premiership. But this was a performance that will give their supporters sleepless nights for weeks to come after Jon Parkin's thumping header earned the Tigers three points which almost guarantees their survival in the Championship. Peter Taylor's team showed more defensive organisation and greater potency in the final third of the field all afternoon but ultimately had Parkin to thank for earning them this fully-deserved victory. Fondly nicknamed 'The Beast' by City supporters, the former Macclesfield forward terrorised Leeds' fragile defence all game and it came as no surprise when he put the gloss on a terri
Read more
More posts