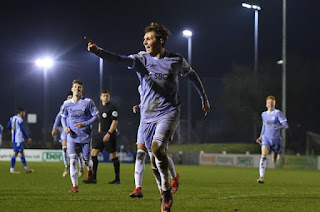 The Whites named another young line-up for the trip to the Lancashire FA on Friday night.

Amari Miller and Sean McGurk were among the more experienced players involved while Nohan Kenneh returned alongside 15-year-old Archie Gray.

Wigan named an older starting 11 but were the ones to fall behind in the 12th minute.

Miller - who caused havoc down the right throughout - delivered low into the box with the Latics clearing their lines quickly.

The ball, though, only went as far as Kenneh who chested down and volleyed emphatically into the bottom corner to open the scoring.

Gray then smashed the post from close-range after more good work from Miller though the hosts levelled just moments later to punish the miss.

Leeds were caught out at the back and Tom Costello made the most of the opportunity to drive into the area and smash a shot past Dani Van den Heuvel.

McGurk, facing his old side, was denied three times by home stopper Sam Tickle in the opening period as Leeds pushed on.

The goalkeeper showed quick reactions to deny his ex team-mate and keep the score level at the interval.

Wigan started well following the break in play but as the half wore on Leeds began to dominate the ball.

Jeremiah Mullen and Joe Littlewood impressed in defence, sweeping up every ball forward from the Latics.

United were struggling to make efforts on goal count until Dean stepped up to strike a shot worthy of winning any match.

The 17-year-old took a touch out of his feet past the defender as Leeds swarmed forward before curling an inch-perfect effort into the top corner from outside the area.

The goal was enough to earn all three points and move the Whites into second in Group E, leapfrogging Sunderland into a qualification spot.