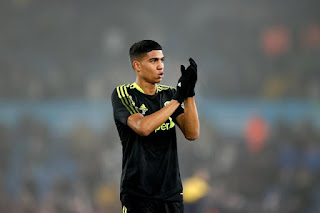 Cody Drameh, who came to Leeds United seeking first-team opportunities, is set to join Cardiff City on loan after making his Premier League debut this season.

With a wicked pace and fearless desire to attack, Drameh had drawn comparisons with former teammate Ryan Sessegnon before joining the Whites in August 2020.

The full-back rubbed shoulders with the Tottenham defender at Craven Cottage, where Drameh rose through the ranks of Fulham’s youth set-up, making his Under 23s debut at the West London side aged just 17 before departing last year when the first-team opportunities he craved didn’t materialise.

Since Victor Orta was tasked with rebooting the academy on Andrea Radrizzani’s arrival in 2017, Leeds’ talent pathway has gained a reputation as one of the faster routes to first team football in the Premier League and Drameh is one of several bright prospects who have recently chosen to invest their futures at Elland Road.

Drameh said that Marcelo Bielsa’s track record for transforming players was a key motive for the move, as well as the opportunity to add his name to the list of young players blooded by the Argentine in his time as Whites head coach.

Leeds paid an initial fee of £1m for the young player, who arrived at Thorp Arch with bags of ambition.

“As a player, I’ve got a great engine, a lot of stamina. I like to get up and down the pitch,” Drameh said after signing.

“I might need a bit of improvement in my attacking but that’s what I’m here for, under the coaching staff at Leeds - to get better.”

The 19-year-old quickly established himself as a top young prospect during his first season at Leeds. Drameh was a permanent fixture in Mark Jackson’s side as the Under 23s impressively gained promotion to Premier League 2 Division 1 at the first time of asking.

The Londoner also made strides towards the goals he established on his arrival - travelling with the first team squad to face Brighton in January, before scoring a delightful goal against Burnley on the last day of the PL2 season in May.

His performances earned him a nomination for February’s PL2 Player of the Month and the attention of England U20s coach Andy Edwards, who selected Drameh to represent his country for the first time. In September 2020, Edwards handed Drameh his full England debut as the Under 20s thrashed Romania 6-1 at St George’s Park.

For those who have tracked the youngster's progress at Thorp Arch, it will come as no surprise that Drameh has been called upon by Bielsa this season.

Speed is not the only asset Drameh offers. He is solid on the ball and boasts a near-immaculate defensive record - very few PL2 wingers can say they made it past him last season or even troubled him in one v one battles.

Though, with his first-team wish granted this season, Drameh has faced some top-quality players that have challenged him to raise his game. Since making his Premier League debut in the Whites' 2-1 victory over Norwich City in October, the defender was selected by Bielsa again to face Manchester City and Arsenal in December.

Against the Gunners, the 20-year-old came under fire by the likes of Ian Wright and Graeme Souness for his positioning as Mikel Arteta's side put four past Leeds at Elland Road amid an ongoing injury crisis in LS11 which left Bielsa without a number of his preferred players.

This season, Drameh has established himself as one of a small group of Under 23s who the Argentine has trusted to plug the gaps but, having arrived at Leeds with a view to seize first-team opportunities, the defender has looked to Cardiff City to fulfil his goals.

The club, meanwhile, see a big part in the future of the club for the teenager, and hope that letting him go to get minutes in the Championship will further enrich this budding talent.