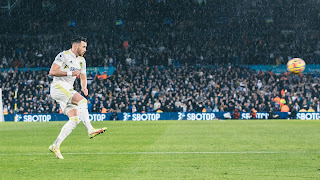 Jackie Harrison was looking forward to celebrating his hat-trick against West Ham with his teammates on the bus home from London. Instead he spent the rest of his afternoon waiting in a room with Raphinha as both players were asked to do a drugs test. The anti-doping authorities must have been as impressed as we were. “I haven’t been tested once all season. Then when I score a hat-trick it’s, ‘Yep, he’s on something,’” Harrison laughs, speaking on the official Leeds United podcast (he’s a very good guest!).

By the time Jackie and Raphie emerged from the depths of the London Stadium, the team bus taking the rest of the players home had already gone. Covid measures mean Leeds charter three buses to games for different staff, so the two players travelled back on a bus with the coaching team. Harrison doesn’t make clear whether Marcelo Bielsa was on the same bus. It could have been a rare opportunity to spend some time with the manager, who once said he tries to keep a healthy professional distance from his players because he thinks, “If the players were closer to me, they would respect me less because they would see how I am really.” Even if Bielsa was demanding the back seat of some different bus, maybe it was a chance to pick the brains of the other coaching staff, no doubt already getting their post-match analysis started. So just what was the journey home like? Harrison laughs again: “Rapha was watching Avatar or something.”

It didn’t bother Jackie. Almost a week later he is still buzzing off the moment he approached the away end, carrying his match ball, hearing his name sung, the centre of attention for the first time.

“The cameras were following me around and I’m like, ‘Oh god, just act normal.’ It’s literally right in my face. It’s so awkward. Do I look at it? Do I do something or not? It kept following me around. Then I went to go thank the fans. They were amazing at the game, just continuously loud. As I was walking over, they were singing my name and it was such a special moment for me. It really touched my heart because there’s not been a particular moment when I’ve walked over and they’re just singing my name. It’s an incredible feeling. It really hit me hard how much support they showed, particularly towards me at the end of the game.”

Getting to feel the love of the away end was a reward for Harrison’s persistence and hard work during a difficult campaign. A frustrating end to 2021 has been forgiven thanks to four goals in his first two league games of 2022. Harrison puts his turnaround down to working on changing his mindset. He is known for his commitment and diligence, making sure he is in the best possible condition, whether that’s extra fitness sessions on holiday or working with a sports psychologist during periods of poor form. At the start of the season he began practising meditation to help him stay present and “in the moment” during games, but he knew something needed to change as his run of matches without a league goal stretched into winter and started playing on his mind.

Jackie needed a dose of what Bielsa gave the players after losing at Nottingham Forest in February 2020. Luke Ayling’s emaciated anguish was followed by a team meeting in which the players were shown all the good things they had done in defeat. Bielsa doesn’t have a plan B because his squad must have complete conviction in plan A, and he had to help them rediscover their faith in what they do. Sure, this was a team that had just thrown away an eleven point cushion in the automatic promotion places, but it was also a team so brilliant it could open such a gap in the first place. Likewise, the Jackie struggling in 2021/22 was the same Jackie who shone in 2020/21. He just had to rekindle his belief in himself.

“I got caught up in too many negatives, and thinking more about those, than trying to find positive ways to think about things I was doing in the game,” he says. “So I’ve been talking with someone recently to open my mind up a little bit more, try and focus more on the positives and more about the reasons why I was doing so well last season and what I was actually doing to achieve this. Being more specific on my game and then trying to replicate these things throughout the week, trying to get in the right mindset through repetition, through training.

“It’s crazy what you can do with the mind when you start thinking more positively instead of focusing on the negatives, ‘I should’ve done this, I should have done that.’ I was just trying to think, ‘What can I do now? What’s worked for me so far?’ Being more positive about things has a massive impact.”

Although he recognises the importance of sharing his problems rather than piling more pressure on himself, Harrison says he finds it difficult to open up to teammates about how he feels when he is struggling. Thankfully Bielsa has a group of senior players he can trust to maintain not just the professional standards of his squad, but their wellbeing too. Liam Cooper, Stuart Dallas, Adam Forshaw and Luke Ayling are namechecked by Harrison as players with plenty of experience of what he was going through, who understand the importance of being positive in the face of adversity.

“They’re great leaders of the group and they show a good level of professionalism throughout anything. Whether it’s going good or bad, they’re always trying to get the team going again. It’s great to have these people in the team, it’s so important. I think especially if you look at some of the periods that we’ve had so far this season, it could be so easy to get down on ourselves and get caught in this black hole and a circle of negative thoughts. But you have these guys that maintain the level and the mentality throughout the good times and the bad times.”

Each of those players mentioned by Harrison was going through a similar experience in their own way, trying to figure out how to recover from poor form, injury, or personal problems off the pitch. “I can tell you right now it’s not for lack of trying,” Harrison says. Ahead of their second Premier League campaign, Bielsa told his players they had to remember how hard they worked to get there in the first place, but if Harrison and the rest of the squad were still working as hard as they always have, the answer was simple: stick to the process, and if you deserve what you get, you will eventually get what you deserve. “The difficulties are sometimes interpreted as obstacles, but sometimes it’s a situation to fortify the strength of the group,” Bielsa said in his pre-Newcastle press conference. In other words, if Harrison hadn’t spent the first half of the season trying to figure out for himself how to improve, we may never have been treated to his three goals at West Ham.

Bielsa also spoke of Leeds now being able to prepare for the visit of Newcastle this weekend while enjoying the “tranquillity of a victory.” Now the challenge facing the squad is the complete opposite. “To have won the last game doesn’t give you any guarantees in the next one,” Bielsa says. Harrison has reminded himself of what a good footballer he is, now it’s time to keep in mind how hard he had to work and the personal demons he had to battle to enjoy moments like full-time at the London Stadium. If he forgets, Cooper and the Squad Dads are always there to remind him.

“Today I was coming in and we’re all super high because we’re coming off a win. They’re making jokes and making sure we’re not getting too far ahead. It’s good to have these people. All the players in this team are all level headed and are willing to work for the team before anything.”