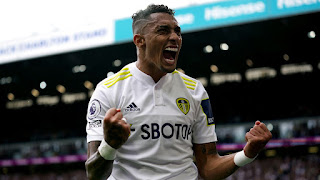 The Brazilian's contract talks with Leeds are said to be positive, with his current deal running until 2024; West Ham are interested in Raphinha, who has scored eight goals in 19 appearances for Leeds this season

A number of clubs, including West Ham, are interested in Leeds winger Raphinha.

The Brazilian's contract talks with Leeds are said to be positive, with his current deal running until 2024.

But West Ham are keeping an eye on his situation while those negotiations are ongoing.

Raphinha has been a revelation since his arrival at Leeds from Rennes in 2020 and has scored eight goals this term as well as making two assists.

The 25-year-old is represented by former Barcelona and Chelsea star Deco, who said last year that Raphinha is ambitious to play at a higher level.

Raphinha played for Brazil in their eventful 1-1 World Cup qualifying draw with Ecuador.

It is thought Reims would expect in excess of £25m (€30m) for the 19-year-old, who was wanted by Newcastle United earlier in the window.

One source has told Sky Sports News that talks are underway between the clubs for Ekitike, who has scored eight goals in 10 Ligue 1 games this season. Last week, Reims president Jean-Pierre Caillot gave an interview to Le Quotidien du Sport in France outlining why they rejected Newcastle's offer for Ekitike.

"It is true that many [clubs] now realise the qualities of the player, but not us. He was trained with us and what he does does not surprise us," he said.

"Newcastle positioned themselves, we discussed it, [and] they made a proposal which does not suit us. As we don't necessarily want to see him leave, we have set the bar quite high.

"They offered us €35m (£29.1m) in total but with many bonuses, some of which were almost impossible to achieve - like, for example, winning the Champions League.

Liverpool have rejected initial approaches from Leeds and Monaco for forward Takumi Minamino.

The Japan international has made 18 appearances this season but only six of those have been starts and four of those came in the Carabao Cup.

However, in spite of the expression of interest from the Ligue 1 club and fellow Premier League side the PA news agency understands Liverpool have turned down both.

While Minamino is well behind Mohamed Salah, Sadio Mane, Roberto Firmino and Diogo Jota in the pecking order Jurgen Klopp's side are still in four competitions - they have a League Cup final against Chelsea in a month's time - is it believed there is no real desire to offload the 27-year-old.

It would take a considerable offer for them to be persuaded to consider allowing the player, signed from RB Salzburg in January 2020 for £7.25m, to leave.