Showing posts from November, 2011
Show All
- November 26, 2011
Yorkshire Evening Post 25/11/11 One in, two out on a quiet deadline day for Whites Simon Grayson gave Leeds United’s squad a vote of confidence after the emergency loan market closed without any new outfield signings or a resolution over the future of Andy O’Brien. The United manager saw a number of enquiries come to nothing ahead of yesterday’s 5pm deadline but claimed his existing group of players would be “very capable” in the run-up to the January transfer window. Leeds pulled off one deal by concluding the signing of goalkeeper and free agent Maik Taylor, and last-minute agreements saw Alex Bruce join Huddersfield Town and Paul Rachubka depart for Tranmere Rovers. But expectations of a development with O’Brien proved unfounded and discussions about his situation were ongoing this morning, seven days after he informed Grayson that he no longer wished to be considered for selection at Elland Road. The option of transferring O’Brien will be unavailable until the turn of the year but
Read more
- November 26, 2011 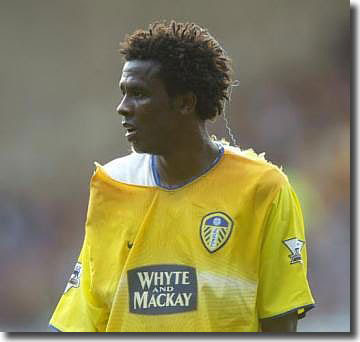 New pages uploaded at mightyleeds.co.uk Matches 25 April 1973 – Hajduk Split 0 Leeds United 0 "I have no hesitation in saying that this ranks alongside our display against Ferencvaros in the 1968 Fairs Cup final as our best in Europe." Don Revie assesses United's sterling rearguard action in Yugoslavia Read the full story at http://www.mightyleeds.co.uk/matches/19730425.htm 7 April 1973 – Leeds United 1 Wolverhampton Wanderers 0 With Wembley so close on the brow of the hill, a semi-final is always the most tense moment of the whole competition. Leeds were determined to get there again - a Bremner goal was decisive, as it had been in 1965 and 1970 Read the full story at http://www.mightyleeds.co.uk/matches/19730407.htm 17 March 1973 – Derby County 0 Leeds United 1 Endless bickering between Don Revie and Brian Clough had not been alleviated by United doing a League double over the Rams, but when a Lorimer thunderbolt settled the Cup encounter it silenced Derby
Read more
- November 22, 2011 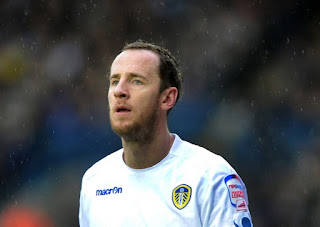 Yorkshire Post 22/11/11 Only reason we employ O’Brien is to play football. He’s resigned as far as I’m concerned – Bates By Richard Sutcliffe KEN BATES insists Leeds United have already moved on from the Andy O’Brien row. The 32-year-old told manager Simon Grayson last Friday that he did not want to play for United again, causing a re-jig of the team to face Burnley just 24 hours later. O’Brien had been due to start against the Clarets after impressing in United’s 1-0 win at Leicester City a fortnight earlier. But, following the defender’s bombshell, the Leeds manager instead turned to Darren O’Dea and Paddy Kisnorbo as his central defensive partnership in a game that the Yorkshire club went on to win 2-1 courtesy of two late goals from Robert Snodgrass. Grayson was delighted to claim all three points but that did not prevent the 40-year-old from lambasting O’Brien and revealing his sense of bewilderment at last week’s dramatic turn of events. He also added that the former Bradford Ci
Read more
- November 22, 2011
Yorkshire Post 21/11/11 Burnley 1 Leeds United 2: United’s ‘daylight robbery’ delights deadly Snodgrass By Richard Sutcliffe at Turf Moor SIX years to the day since Leeds United pulled off one of their finest comebacks of all time, the Yorkshire club were at it again in enemy territory to claim a memorable three points. This time, Burnley were the unwitting victims as a hard-fought ‘War of the Roses’ clash was dramatically settled by two goals in the final 15 minutes from Robert Snodgrass. Up until the Scottish international’s late brace, Leeds had hardly been in the game with only on-loan goalkeeper Alex McCarthy preventing the Clarets wrapping up the points. So dominant were the home side, in fact, that McCarthy even likened United’s dramatic fightback afterwards to “daylight robbery”. Not, however, that the 3,721 fans who had made the short trip across the Pennines cared a jot about that come the final whistle as they celebrated a victory that was enough to earn a return to the pla
Read more
- November 20, 2011 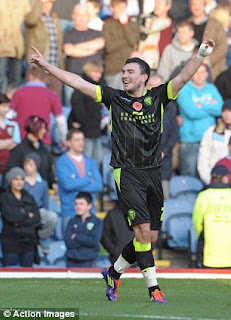 Mail 19/11/11 Burnley 1 Leeds 2: Late Snodgrass double piles pressure on Clarets boss Howe A second-half double from Robert Snodgrass secured Leeds an unlikely victory that cranks up the pressure on Burnley boss Eddie Howe. Simon Grayson's men were looking to move into the play-off places by claiming all three points, but their quest looked set to prove unsuccessful as the Clarets dominated for large periods. Howe's side were set on their way early on as Jay Rodriguez nodded home. But despite being under the cosh for much of the clash, the visitors equalised courtesy of Snodgrass's third goal of the season. And the Scotland international added another in the 88th minute to ensure Leeds made it back-to-back victories. In contrast, Burnley's third successive loss leaves Howe's position increasingly precarious. Seemingly refreshed by the recent international break, the visitors started positively and fashioned the first opening when Adam Clayton volleyed just over. H
Read more
- November 20, 2011
BBC 19/11/11 Simon Grayson says Andy O'Brien will never play for Leeds again Leeds manager Simon Grayson says Andy O'Brien refused to play in the win over Burnley and will never appear for the club again. Grayson said the defender, who has been heckled by supporters, told him on Friday he did not want to play against the Clarets. "It came as a shock, especially after I have backed him publicly and privately over the last few weeks," Grayson said. "He won't play for this football club again as long as I am here." O'Brien, 32, has made three Championship appearances for Leeds this season, returning to the side in the win over Leicester on 6 November. Speaking after Leeds' 2-1 victory over the Clarets, Grayson said: "Andy came to me on Friday and said that he no longer wanted to play for this football club. "I said I needed him to and I thought he played well. "As manager, I have the right in the early parts of the season to take pla
Read more
- November 19, 2011 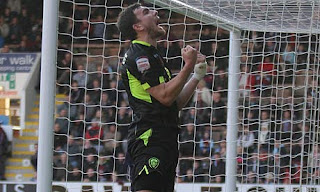 Guardian 19/11/11 Robert Snodgrass strikes late to lift Leeds past Burnley Burnley 1 Leeds United 2 A second-half double from Robert Snodgrass secured Leeds an unlikely victory that cranks up the pressure on the Burnley manager Eddie Howe. Simon Grayson's men knew a win would move them – at least temporarily – into the play-off places but fell behind in the 10th minute on as Jay Rodriguez headed home. Yet despite struggling for much of the game, Leeds would equalise courtesy of Snodgrass's third goal of the season. And the Scotland international added another in the 88th minute to ensure Leeds made it back-to-back victories. In contrast, Burnley's third successive loss leaves Howe's position increasingly precarious. Seemingly refreshed by the recent international break, the visitors started positively and fashioned the first opening when Adam Clayton volleyed just over. However, their bright start did not last long as the Clarets took the lead in just the ninth minut
Read more
- November 19, 2011 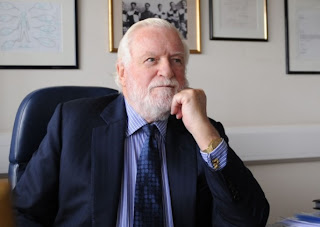 Yorkshire Evening Post 12/11/11 Grayson targeting top two finish By Leon Wobschall Simon Grayson admits an automatic promotion berth is very much in Leeds United’s sights in 2011-12. With a third of the Championship campaign gone, United are right on the fringes of the play-offs in seventh spot, one place and one point better off than they were after the same amount of games – 16 – last season. A jet-propelled run in the run-up to the festive season last year saw United briefly rise up to second in the table last Christmas and Grayson feels this year’s crop have it well within their capabilities to rise to those giddy heights again – and last the course if they show consistency. That’s something that only leaders Southampton have truly shown this term, with just six points separating second-placed West Ham and United, who went into the international break on the back of an impressive 1-0 win at Leicester City. Grayson said: “Being around the play-offs is where we want to be and we exp
Read more
- November 07, 2011
Yorkshire Evening Post 7/11/11 Leicester City v Leeds United: Whites enjoy the last laugh By Phil Hay Leicester City did not stoop to the depths of showing footage of Leeds United’s massacre at the hands of Blackpool before the game against the Elland Road club. Sympathetically, they chose to replay their own rout of Leeds in 2003 when Roque Junior played the part of Paul Rachubka. United have been at the mercy of ridicule this week but there were no jokes on them in Leicester. A picture-book goal from Adam Clayton at the King Power Stadium washed away the bloodstains of their capitulation to Blackpool. Clayton’s 20-yard finish in the 69th minute, curled beautifully into the top corner of Kasper Schmeichel’s net, forced a victory from a game which had a goalless scoreline written all over it and gave manager Simon Grayson something to delight in at the end of an unedifying week. Those who know him and his team well could not have been surprised by the strength of their response. Clear
Read more
- November 06, 2011 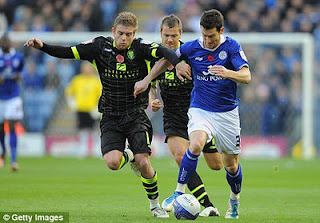 Mail 6/11/11 Leicester 0 Leeds 1: Clayton gives United the edge over managerless Foxes Adam Clayton's second-half wonder strike helped Leeds banish the memories of their midweek defeat to Blackpool and give managerless Leicester another headache heading into the international break. Leeds conceded five at home for just the second time in their history in losing to the Seasiders on Wednesday and would have probably taken a morale-boosting 0-0 draw here were it to have been offered to them before kick-off. But when they became the first of the sides to take a tepid game by the scruff of its neck with Clayton's 25-yard curler with 69 minutes gone, a maximum-point haul was a reality and their notoriously fragile defence held out to secure a first win over Leicester in nine attempts. They were rarely tested by Leicester, though, who did not force debutant goalkeeper Alex McCarthy into a meaningful save all afternoon. A consequence of that was a second loss in three games for caret
Read more
- November 04, 2011 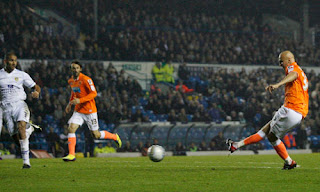 BBC 4/11/11 Leeds United agree loan deal for keeper Alex McCarthy Leeds have signed England Under-21 keeper Alex McCarthy on a month's loan from Championship rivals Reading. With first-choice Andy Lonergan injured, Leeds boss Simon Grayson decided he needed extra cover after the 5-0 midweek loss to Blackpool. "They are keen for him to play games and hopefully his loan spell here will help with his development," Grayson told Reading's website. McCarthy goes straight into the squad for Sunday's game at Leicester. And he could be handed a place in the starting line-up after three mistakes by Paul Rachubka against Blackpool, which all resulted in goals, saw him replaced in the second half by youth-team keeper Alex Cairns. Leeds fans may remember McCarthy following his man-of-the-match performance for Reading at Elland Road in last season's 0-0 draw. I need to give Alex more games and more experience of this level so that was the thinking behind it Reading boss Br
Read more
- November 04, 2011 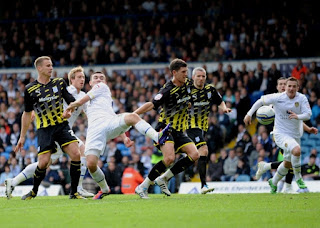 Yorkshire Eveing Post 31/10/11 Leeds United v Cardiff City: A point is least Whites deserve By Phil Hay Leeds United’s miserable record against Cardiff City is such that a draw in this fixture is generally seen to be worth its weight in gold. Simon Grayson knows his history like any of Leeds supporters but yesterday’s result at Elland Road will not dissuade him from thinking that Cardiff have a charmed existence whenever they find themselves in United’s line of fire. Robert Snodgrass averted a seventh successive defeat at the hands of the Welsh club with a well-earned goal on 73 minutes, but despite the timing of his equaliser, the draw salvaged was not exactly a point gained. Close though Cardiff were to a predictable victory – they last lost to Leeds in 1984 – both it and the final result depended on a mistake by Darren O’Dea and the outstanding agility of their goalkeeper, David Marshall. O’Dea has been something of an unsung hero in the past fortnight, scoring against Coventry Cit
Read more
More posts