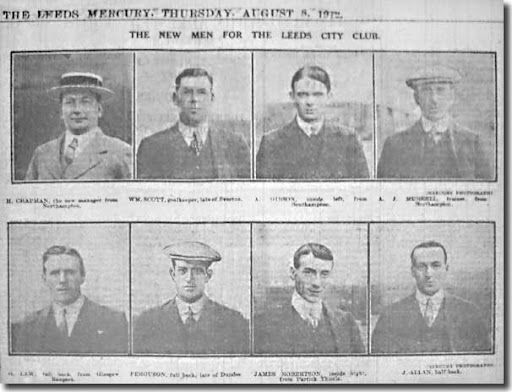 New pages uploaded at mightyleeds.co.uk Season 1912/13 – A fresh start It’s back to the days of Leeds City, with the story of Herbert Chapman’s first season as manager of the club. He brought a new professionalism and big names to Elland Road. Bradford City skipper Jimmy Speirs joined and brought out the best in Billy McLeod who set a new scoring record for City You can also read about the man whom Chapman succeeded in the post Manager – Frank Scott-Walford The successful candidate from a list of 90 applicants, who had to seek cheap unknowns in Ireland as City disappeared under a mountain of debts and had to seek re-election There’s also the story of Stan Cubberley Leeds City's Mr Versatility, one of their great stalwarts, who brought steel to midfield Read the full stories at http://www.mightyleeds.co.uk/seasons/191213.htm http://www.mightyleeds.co.uk/seasons/191213part2.htm http://www.mightyleeds.co.uk/pdf/season191213part3.pdf http://www.mightyleeds.co.uk/managers/sco
Read more
- June 02, 2009
Yorkshire Evening Post 2/6/09 No bids for Beckford By Leon Wobschall Leeds United chairman Ken Bates has confirmed the club haven't yet received any bids for transfer-listed striker Jermaine Beckford - while insisting he isn't losing any sleep over the situation. Beckford's future has been up in the air following his decision to turn down a new three-year deal with his current Whites' contract due to expire next summer. Several clubs, including Middlesbrough, Coventry and Sheffield United have been linked with moves for the free-scoring 25-year-old, who plundered 34 goals for United last term. But no-one has yet firmed up their interest, with Bates relexed about the whole situation, with the notion of being pressurised to sell the last thing in his mindset. On the Beckford situation, he said: "We have had no inquiries yet, but that is not usual at this time because the season has just ended and most managers, scouts and coaches are away winding down. "They com
Read more
More posts