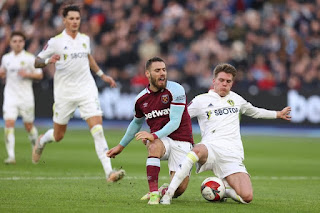 Leeds United's FA Cup defeat at West Ham United provided, at least, a small number of positives for the Whites.

The first was Leo Hjelde's display, the 18-year-old debutant giving a good account of himself up against one of the Premier League's top strikers in Michail Antonio. The game also brought full debuts for Sam Greenwood and Lewis Bate, although neither got more than 45 minutes of action at the London Stadium.

Here's the YEP take on what was ultimately yet another bitterly disappointing and controversial day in London.

Marcelo Bielsa' s FA Cup woe continues. Four times he has managed Leeds United in the competition and on all four occasions they've failed to make it through to the fourth round. He fielded as strong a team as was wise for this one, given the astonishing extent of his injury crisis, but they came up short. The four minutes of stoppage time saw them push desperately for an equaliser only to concede a second.

There still does not appear to be an available explanation for VAR's decision to allow West Ham's opener. Jarrod Bowen was in an offside position and whether or not he touched the ball, he interfered with Illan Meslier's attempt to gather. A baffling one and a costly one for Leeds. West Ham were good value for the win given the chances they generated and the control they enjoyed but had the goal been disallowed who knows what might have transpired?

Thrown in against Antonio for his debut, making it as tough as they come, but he stood up well. Very few defenders keep the West Ham star quiet and he did cause problems for his teenage marker, but Hjelde had his moments too. He can be proud of his effort. Twice this season Bielsa has pitted an Under 23s centre-half against the 31-year-old veteran and on both occasions the Leeds shirt has far from been disgraced.

They will be disappointed to have come off at the break and not been given more of a chance to show what they could do, but neither could really say they'd shown they could turn the game around in the first 45 minutes. Both will still be proud that they have made the next step and started a senior game for Leeds, in front of almost 9,000 away fans to boot.

All that time to look at it and yet still the decision left everyone in the stadium and those watching at home baffled. Oh for the audio of the conversation between the officials as they decided Jarrod Bowen was not impacting the play from an offside position.

This should have been his big comeback and yet he couldn't be risked due to the problem that cropped up in training. It doesn't sound like a major one but he will have been champing at the bit to play in the FA Cup. If it means he plays and scores a winner at West Ham next week few will argue against the decision to keep him at home for the cup tie.

You could sense the frustration even before the game as he talked about trying to make the right decisions for the club when faced with an FA Cup game followed by a Premier League game, amid the injury crisis. And after a frustrating encounter with West Ham he was, for the umpteenth time, asked about making signings in January. Showing the patience of a saint, he answered again to reiterate his point about signing players who are better than the ones he's got currently. The current situation with injuries, a struggle of a season and constantly having to talk about subjects he clearly doesn't find as stimulating as the actual football all appear to be grating on him.

Leeds United hero Jermaine Beckford was yet again employed as a TV pundit for this game. The former striker has carved out quite the niche for himself in the media world since retirement and only enhanced his reputation among Whites supporters with his common-sense approach to discussing Bielsaball and his enthusiasm for the game. As the broadcasters were preparing to go live Beckford was attacked by a make-up wielding assistant whose attempts to make his face TV-ready seem somewhat superfluous given the man hasn't aged a day since he stopped playing.

When the lengthy VAR check was going on it was clear that Luke Ayling was confident of one outcome, taking the ball from the centre circle and kicking it back towards Illan Meslier. He began to prepare himself for a restart in the Leeds area, only for referee Stuart Attwell to engage him in conversation before signalling that the goal was to stand. The inquest wasn't over, however. A break in play shortly after gave Junior Firpo a chance to speak at length with fourth official Jarred Gillett, while Meslier explained to Attwell why the goal should not have counted.

The half-time break at the London Stadium heard an airing of a West Ham themed rap, written last week by Hammers fan and MOBO award winner Guvna B. He first performed it live on Sky Sports before West Ham fans convinced him to release it as a studio track. With proceeds going to Isla Caton, a little girl suffering from cancer, West Ham supporters propelled the track to the top of the iTunes chart in the UK.

The interval also brought a huge cheer as Morecambe's 1-0 lead over Tottenham Hotspur was read with glee by the stadium announcer. Earlier in the afternoon the announcer had interviewed Marlon Harewood about his FA Cup history with the Hammers and his thoughts on the game. The almost-9,000 strong visiting support asked, none too politely, who he was and his response was to state his unflinching confidence that Leeds would be no problem for West Ham. Harewood had the last laugh in that regard, but Leeds fans produced a few humorous moments of their own throughout the contest, suggesting in one chant that West Ham had sold their soul for a less than aesthetically pleasing new abode.