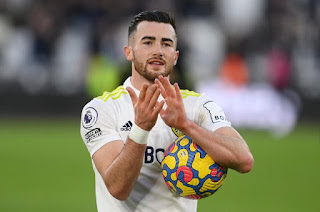 Jack Harrison believes Leeds United showed a more aggressive side in their victory over West Ham.

The Whites met the Hammers for a second successive week at the London Stadium but turned the tables on their counterparts in the Premier League.

Leeds were beaten soundly in the FA Cup last Sunday but played out a 3-2 thriller in the capital to earn an important three points.

Harrison, who had one top-flight goal to his name ahead of kick-off, bagged an impressive hat-trick to lift depleted Leeds over Europe-chasing West Ham on the day.

Marcelo Bielsa saw Adam Forshaw and Junior Firpo limp off after 20 minutes following the winger’s breaking of the deadlock.

David Moyes’ outfit levelled through a Jarrod Bowen header but Harrison again put the visitors in front from close range at a corner.

Pablo Fornals again restored parity in the second half during a topsy-turvy encounter before United’s wide man showed a killer instinct to lift the ball into the net for a third.

Mateusz Klich saw a fourth strike chalked off thanks to VAR intervention as his effort clipped the narrowly-ruled offside substitute Rodrigo on the line.

“The last week we have been working super hard after the defeat against West Ham in the FA Cup,” match-winner Harrison reflected afterwards.

“We wanted to come back and show a different side of ourselves, a more aggressive and intense side.

“I think we came out and did that right from the start. They’re a great side with a lot of talent, but we were able to control the game at times and get three points.

“I’m just delighted to get a hat-trick. It is an amazing feeling to score and when you get three it’s even better and when you can help the team to succeed in a tough match like today. I am just really happy to take part in the win.”

Leeds were again down to the bare bones owing to a host of senior absences in London.

Youngsters Lewis Bate and Leo Hjelde were required to step off the bench to make their Premier League debuts which compounded an already-difficult situation amid a growing injury list.

“I think it’s important to attack these matches and show character,” Harrison said. “Hopefully, we can build on this and get on a good run. We’ve just got to take it game by game and see what happens.

“We have been really unfortunate with injuries but against adversity we always work hard and push ourselves to the limits.

“The young lads have done that by coming in, showing their talent and working hard. It has been good to come through a tough period.

“Hopefully, we can go on a good run of form between now and the end of the season.”

Bielsa’s side lifted themselves nine points clear of the bottom three thanks to the win over the Hammers.

The Whites entertain Newcastle United on Saturday at Elland Road, who sit in 19th spot heading into the fixture.

“We’ll do exactly the same as today,” Harrison said over the Magpies meeting.

“We’ll work hard all week. We’ll analyse and do everything we can to get the three points.”