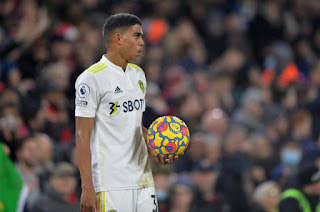 Leeds United are expected to loan Cody Drameh to Cardiff City for the rest of the season despite the injury crisis that has seen him feature in three of their last four matches.

The Whites had 10 players injured for Sunday’s FA Cup tie at West Ham United, and defender Diego Llorente will be suspended when the sides meet again at the London Stadium in the Premier League seven days later.

Although Leeds will be hoping some injured players come off that list, with Patrick Bamford perhaps the most likely, Sam Greenwood picked up an injury and Junior Firpo left the field with what he seemed to suggest was blurred vision. If that was found to be caused by concussion, the protocols would prevent him playing at the weekend.

Drameh replaced Firpo in the third-round tie, with the versatile Stuart Dallas switching from right to left-back to allow the 20-year-old to play on his preferred side.

Firpo is the only specialist senior left-back in the squad, with Luke Ayling the only right-back.

Although he playing in his preferred position at the London Stadium, Ayling has been needed in central defence, in a two or a three, in all of Leeds’s last five league games. Liam Cooper, Charlie Cresswell and Pascal Struijk, who has filled in at left-back as well as midfield, are injured.

Midfielder Jamie Shackleton has frequently been used as a stand-in right-back this season, but has not featured since mid-December and is not expected to return from an Achilles problem until the international break at the end of the month. That leaves Dallas and Drameh as the next in line.

Despite that, 20-year-old Drameh has been lightly used this season. He followed up his Leeds debut as a League Cup starter at Arsenal with a Premier League substitute appearance at Norwich City. He also came off the bench at Manchester City in the league, and started December’s 4-1 defeat at home to Arsenal.

He and his agent feel he needs more regular football for the sake of his development and the Leeds hierarchy appear to agree.

Bielsa’s policy is to have a tight squad of only 18 senior players, two of them goalkeepers, supplemented by 15 promising youngsters, of which Drameh is currently one. It has worked well in the past two seasons but horrendous luck with injuries in 2021-22 have seen the club go from ninth in the league last term to fighting a relegation battle in this.