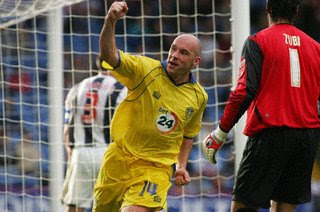 Sporting Life 30/9/06 CARVER: HONEYMOON PERIOD IS OVER By Andy Tilley, PA Sport Caretaker Leeds manager John Carver is in the dark about how long he will remain in charge at Elland Road but admits his "honeymoon period" is over. Leeds slumped to a 4-2 defeat against 10-man West Brom at the Hawthorns, and Carver scotched reports chairman Ken Bates had promised him the manager's job made vacant by the sacking of Kevin Blackwell. But Carver, who steered Leeds to a 3-2 win against Birmingham in his first match last week, confirmed he was ready to carry on in the role. Carver said: "It is not true I have been given the job. "I have spoken to the chairman and all he's told me to do is get on with it. "He has not told me anything other than that about the job and I am not listening to anything which comes from the outside. "My job, as I see it, is to get this team up the league. "There has been a honeymoon period for me but this result has been a
Read more
- September 24, 2006 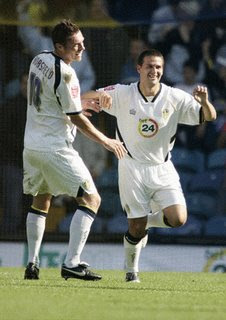 Telegraph 24/9/06 Rejuvenated Leeds bring fans some relief By Jeremy Cross at Elland Road (Filed: 24/09/2006) Leeds (2) 3 Birmingham (1) 2 A change of manager and change in fortune for Leeds United at Elland Road, where a late own goal from Olivier Tebily gifted the home side a much-needed win and provided chairman Ken Bates with some justification for sacking manager Kevin Blackwell. Forceful and creative, Leeds profited from a brace by David Healy in their quest to topple high-flying Birmingham City and provide some welcome relief for their long-suffering supporters. Things are never straightforward at Leeds, however, and equalisers from Martin Taylor and then Nicklas Bendtner seemed certain to deny the home side until Tebily, a substitute, headed Steve Stone's cross into his own goal. John Carver took charge of his first game as caretaker manager in the wake of Blackwell's dismissal. The fixtures could have been much kinder to him, considering the quality of the opposition.
Read more
- September 22, 2006
Leedsunited.com 22/9/06 LOOKING FORWARD John Carver held his first press conference since being named caretaker manager of United and was in a confident and positive mood. "We have got to look forward," he said. This is a great opportunity for me. Leeds is a big club, with fantastic support and some very good players. We're facing a big challenge, the players are looking forward to it and so am I." John, who was appointed caretaker boss following the sacking of Kevin Blackwell earlier this week, said he spoken individually with all the club's senior players and had been encouraged by the outcome. "We want to get back up the table as quickly as possible and I know the players we have at the club are quite capable of doing that," he said. We have just completed a great training session and I have got them organised and they are right for the game against Birmingham City tomorrow. I think we might well see a good reaction from them tomorrow. "One or t
Read more
- September 21, 2006
Independent 21/9/06 Blackwell sacked as Bates aims to lift gloom By Phil Shaw In characteristically perverse fashion, Ken Bates sacked Kevin Blackwell as Leeds United's manager yesterday, less than 24 hours after the Championship's 23rd-placed team appeared to have eased the pressure on him by beating Barnet 3-1 in the Carling Cup. Bates, who handed Blackwell a two-year contract extension earlier this year, had clearly taken a longer-term perspective. Leeds won only one of the last 10 League fixtures in 2005-06 and were trounced 3-0 by Watford in the play-off final. This season, they have just two 1-0 wins from eight outings. Dennis Wise, a Chelsea player during Bates' time as chairman, is the early favourite for the job, although the former Millwall player-manager is only months into a three-year contract with Swindon. Others thought to interest the Leeds owner are Alex McLeish and Claudio Ranieri, formerly of Rangers and Chelsea respectively, and Luton Town's Mike Ne
Read more
- September 17, 2006
Sunday Times 17/9/06 Coventry 1 Leeds 0: Blackwell on his last legs Barry Flatman at Ricoh Arena Apart from an affinity with Leeds United, London-bred Ken Bates has many things in common with thousands of Yorkshiremen and Kevin Blackwell probably knows these characteristics only too well. Neither party sees the point in being either discreet or forgiving and when hard talking is necessary, they are invariably blunt and to the point. Leeds fans had their say after a third consecutive defeat left the club second bottom of the Championship. Only four months after losing out in the play-offs, patience is wearing thin at Elland Road and Blackwell’s team have now gone five hours and 29 minutes without scoring a league goal in open play. “Blackwell, Blackwell, time to go,” came the chant from the away supporters with the final whistle still a minute or so away. “Blackwell, time to go!” Those doing the chanting can only surmise whether the chairman is of the same opinion. Perhaps Bates took no
Read more
- September 16, 2006 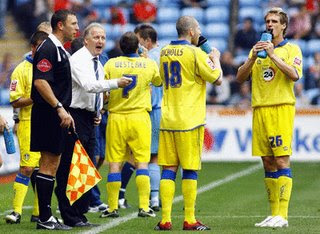 leedsunited.com 16/9/06 United beaten at Coventry United manager Kevin Blackwell marked his 100th game in charge of the club by ringing the changes, following the midweek defeat at the hands of Sunderland. Kevin Nicholls was handed his full debut at the centre of a three-man midfield with Sean Gregan making his first Coca-Cola Championship start of the season as the anchor man. Steve Stone and Jonathan Douglas were the men who made way by dropping to the bench. Seb Carole was also recalled to the starting line-up in place of Eddie Lewis as Blackwell opted for a 4-3-3 system at the Ricoh Arena. It's a formation favoured by the manager, particularly away from home, and it almost paid dividends as early as the eighth minute when, after soaking up early Coventry pressure, United broke quickly and David Healy rattled the bar with a header, following an Ian Westlake cross from the left. Westlake also forced City's Elliott Ward into evasive action when the defender had to react quick
Read more
- September 11, 2006
Yorkshire Post 11/9/06 I'll just keep doing my job – Blackwell RICHARD SUTCLIFFE KEVIN BLACKWELL has hit back at the Leeds United fans who called for his dismissal after yesterday's last-gasp defeat to Wolves and insisted: "I am doing the best job I can." Jay Bothroyd's superbly struck winner in the second minute of stoppage time was enough to nudge United down a place to 16th in the Championship with a return of two wins and a draw from their opening six games.A section of Elland Road's lowest league crowd since the late 1980s vented their frustration at the final whistle by chanting 'time to go' at the under pressure Blackwell.He, in turn, pointed with some justification to the nature of his side's display against Wolves, but the United manager must also be well aware that results must improve sooner rather than later if supporters are to be placated.Blackwell said: "I am doing the best job I can and it is disappointing when things do not g
Read more
- September 10, 2006 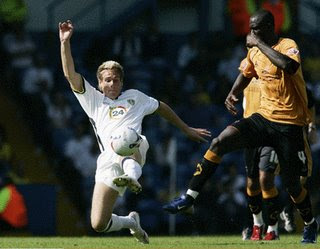 Leedsunited.com 10/9/06 UNITED LOSE IT AT THE DEATH UNITED: Warner, Kelly, Butler, Kilgallon, Crainey, Carole, Douglas, Westlake, Lewis (Stone 83), Healy, Moore (Beckford 78) Subs: Sullivan, Gregan, Blake. WOLVES: Murray, Olofinjana, Breen, Craddock, Henry, Cort (Bothroyd 46), Edwards, Johnson (Clarke 75), Potter, Jones, Mulgrew (Little 44). Subs: Ricketts, Ikeme. Referee: L Mason United manager Kevin Blackwell handed Jonathan Douglas his first start since joining the club on a permanent basis while David Healy returned from goalscoring duty with Northern Ireland to partner Ian Moore in the front-line. And both sides started brightly, playing some neat attacking football. Carl Cort, who had a good early chance, and Jemal Johnson forged a lively strike pairing for Wolves while Ian Westlake and Douglas were pivotal in driving Leeds forward during the early stages. United's best moment early on came when Seb Carole threaded the ball through to Westlake, but the midfielder was unable
Read more
- September 09, 2006
Leedsunited.com 8/9/06 WOLVES BID FOR LEWIS United chairman Ken Bates has revealed that the club turned down a transfer deadline day bid for winger Eddie Lewis. Wolves stepped in last week in the hope of signing Eddie - but the bid was rejected, and the chairman's revelation comes just days before the two sides go head to head in the Coca-Cola Championship. "We had a deadline day bid by Mick McCarthy who tried to buy Eddie Lewis," the chairman revealed on Yorkshire Radio. "Of course we said no, and I'm hoping that he will show them what they missed out on, when we meet on Sunday." The Elland Road chairman has also hit back at suggestions that the club failed to make any attempt to find a compromise deal with Eirik Bakke before his move to Norwegian outfit Brann Bergen. "Eirik Bakke was on £23k plus £4k an appearance and we couldn't afford him," said the chairman. "We approached his agent on a number of occasions to see if we could meet hal
Read more
- September 08, 2006 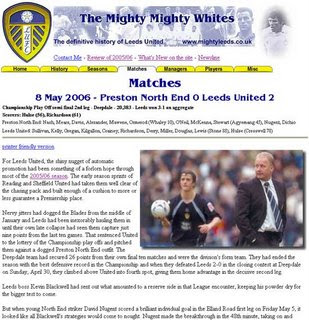 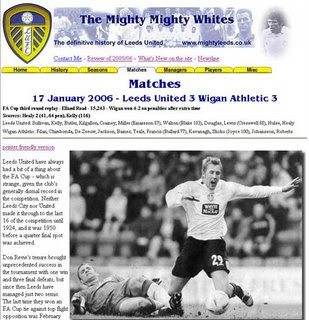 New pages uploaded at mightyleeds.co.uk 17 January 2006 - Leeds United 3 Wigan Athletic 3 Mixing it with the big boys again, United play out a classic Cup-tie against Wigan, with Gary Kelly reserving one of his specials for the occasion Read the full story at http://www.mightyleeds.co.uk/matches/20060117.htm
Read more
More posts