Showing posts from October, 2006
Show All
- October 29, 2006
Sunday Times 29/10/06 Leeds 2 Southend 0: Leeds show their teeth Duncan Castles at Elland Road Leeds came into this match in relegation form, having shipped 18 goals while losing their last five matches. Logically they should possibly have lost Dennis Wise’s first match in charge too, since it was against the same side who had beaten Leeds here during the week. But Wise relishes challenges and he rose to this one. The win came from late goals in each half, from Ian Moore and Robbie Blake, large draughts of perspiration, and a fair degree of fortune in resisting Southend’s second-half dominance. Wise, though, had been flown in to end a miserable run, and that he did. Never shy about making an impact, his first move at Elland Road had been to appoint Kevin Nicholls captain, principally because the midfielder was brave enough to give him a kicking last time they played each other. “I want nastiness and togetherness,” said Wise, who also wanted to send a message out to an ageing and latel
Read more
- October 28, 2006
Times 28/10/06 He's only 5 foot 4 . . . but Leeds fans should Wise up to his merits By Giles Smith THE dismay among fans surrounding the appointment of Dennis Wise as manager of Leeds United is perfectly understandable. Anyone who has taken an interest in the storied career of this crop-haired, modern-day maverick tends to develop firm opinions about him and is, accordingly, bound to wonder whether Leeds is a fit place for a person of Wise’s sophistication and thoughtfulness. You can see how the culture of the club has already unsettled the former Chelsea captain. At his inaugural press conference, conducted in a room threateningly hung with images of Norman Hunter and the late Billy Bremner, Wise spoke, with apparent relish, of the "horrible" Leeds sides of the past and pledged to bring back some of the "nastiness" that characterised the club in their long-gone heyday. He also appointed Kevin Nicholls as the new club captain — chiefly, as he explained it, on th
Read more
- October 28, 2006
Sporting Life 26/10/06 WISE WANTS LEEDS TO GET NASTY By Mark Walker, PA Sport New Leeds manager Dennis Wise wasted no time in stamping his authority on the ailing Yorkshire club and told sceptical fans he was now one of them - whether they liked it or not. The former Chelsea midfielder, a player the Leeds fans used to love to hate, insisted he can get the club back to the Barclays Premiership and said he was ready to start wielding the axe in pursuit of success. The no-nonsense 39-year-old revealed at a press conference where he and assistant Gus Poyet were introduced to the media that his first task was to strip Paul Butler of the team captaincy and hand the role to Kevin Nicholls. Wise stated it was clearly evident from the Carling Cup defeat to Southend in midweek that the dressing room was not harmonious. But he was pleasantly surprised by the welcome he received from fans at Elland Road and insisted he had already put what had gone on in the past firmly behind him. "I was exp
Read more
- October 28, 2006 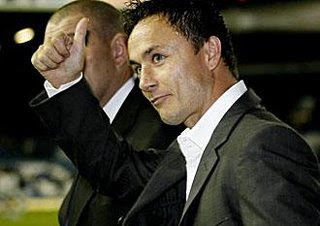 Guardian 26/10/06 Meet the new Dennis Wise - a thinking man's manager Dominic Fifield Thursday October 26, 2006 The Guardian Dennis Wise has received a ringing endorsement from the man who hopes to replace him at Swindon Town, Ady Williams, as the new Leeds manager attempts to spark a similar revival at Elland Road to the one instigated at the County Ground. Wise and his assistant, Gus Poyet, watched their new side capitulate to Southend United in the Carling Cup on Tuesday and will be unveiled this afternoon with Leeds a point from the foot of the Championship and reeling after five successive defeats. Yet Williams, who was signed by the 39-year-old in the summer with Swindon relegated to League Two, believes he could prove an inspirational appointment, having lifted Swindon to third place in his short spell in charge. "Swindon needed to be picked up," said Williams, a Wales defender who briefly played alongside Wise at Coventry last season before playing his part in Sw
Read more
- October 23, 2006
Leedsunited.com 23/10/06 CARVER DEPARTS Caretaker manager John Carver has parted company with Leeds United. John presided over five games as caretaker boss, following last month's departure of Kevin Blackwell. He opened up with a win against Birmingham City on September 23, but United have lost their last four league games and are now 23rd in the Coca-Cola Championship. The club would like to place on record its thanks to John for stepping into the breach as caretaker manager and also for all his hard work over the past 15 months as assistant manager. David Geddis is expected to take control of Tuesday's Carling Cup tie against Southend United.
Read more
- October 23, 2006
Guardian 23/10/06 Leeds agree Wise compensation Swindon manager and assistant Poyet to talk to Leeds Staff and agencies Monday October 23, 2006 Guardian Unlimited Leeds tonight announced they have agreed financial compensation with Swindon and have been given permission to discuss personal terms with Dennis Wise and Gus Poyet. The Robins revealed this morning they had granted the Championship strugglers permission to open talks aimed at bringing the management duo to Elland Road. But Swindon later claimed negotiations had been broken off after Leeds failed to meet the level of compensation required to prise them from the County Ground, as set out in their contracts. But, in a statement tonight on their official website, Leeds said: "Leeds United have agreed financial compensation with Swindon Town and have now been granted permission to discuss personal terms with both Dennis Wise and Gus Poyet with a view to them filling the vacant managerial position at the club." This la
Read more
- October 18, 2006
Yorkshire Post 18/10/06 History sounds ominous note for troubled Leeds Richard Sutcliffeat Elland Road Leeds United 1Leicester City 2 CHAMPIONSHIP THE MISERY surrounding Leeds United deepened last night with the latest in what is fast becoming an alarming series of defeats.Goals from Danny Tiatto and Iain Hume were enough to condemn United to their eighth reverse in just 12 Championship games and make this the club's joint worst start to a season of all time. Only three times in United's long history have they lost two-thirds of their opening dozen games and on each occasion it proved very difficult to turn their season round. Twice, in 1946-47 and 2003-04, the club were relegated, while in the 1936-37 campaign Leeds finished just one place above the drop zone in the old First Division.Whether such a fate awaits the current crop remains to be seen but the manner of the two most recent defeats has certainly set the alarm bells ringing at Elland Road.True, Leicester's one-go
Read more
- October 15, 2006 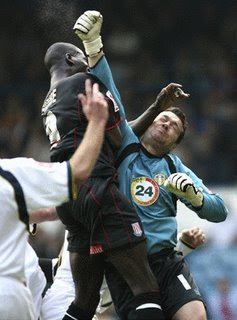 Leedsunited.com 15/10/06 I'M SORRY Leeds United caretaker manager John Carver apologised to fans after Saturday's 4-0 Elland Road defeat at the hands of Stoke City. United slipped to 22nd in the Championship after Stoke rammed in four goals without a reply to complete an unhappy afternoon for all at Elland Road. The caretaker boss said: "The first thing I want to do is apologise to the supporters for that. "It was a dreadful day and I can only say sorry to the fans. "I pick the team and I prepare the team so the responsibility has to stop with me. "I feel as low as I've ever felt after that. It's a lonely place when you are out there. It's a dreadful result for everyone connected with this club." United are back in action again on Tuesday when the caretaker manager will attempt to pick up the pieces in readiness for a clash with Leicester City. Striker Geoff Horsfield is a major doubt after suffering a hamstring injury against Stoke. Sunda
Read more
- October 14, 2006 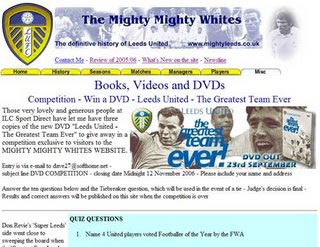 Competition - Win a DVD - Leeds United - The Greatest Team Ever Those very lovely and generous people at ILC Sport Direct have let me have three copies of the new DVD "Leeds United - The Greatest Team Ever" to give away in a competition exclusive to visitors to the MIGHTY MIGHTY WHITES WEBSITE. Visit the site to take part http://www.mightyleeds.co.uk/books/videogreatestteam.htm
Read more
- October 10, 2006
BBC 10/10/06 Leeds seal loan deal for Wright Leeds have signed veteran Sheffield United defender Alan Wright in a month-long loan deal. The 35-year-old is caretaker manager John Carver's first signing and joins the squad for training on Thursday. Carver told the club website: "Alan comes with a wealth of experience as he has made only 500 appearances mostly in the Premier League. "He's got good energy and he will attack and go forward but primarily he is a defender." Wright, whose last appearance for Sheffield United was against Arsenal on 23 September, has played for a host of clubs including Blackpool, Blackburn and Middlesbrough as well as eight years at Aston Villa.
Read more
- October 07, 2006
McAllister enters Leeds frame Former Leeds United favourite Gary McAllister is the latest name in the frame for the manager's job at Elland Road. The Whites issued a statement this week playing down speculation talks with interested parties had taken place, while Alan Curbishley and caretaker boss John Carver have denied they have been offered the post. However Glenn Hoddle, Brian Kerr and now McAllister have all emerged as potential candidates to succeed Kevin Blackwell who left Elland Road McAllister enjoyed a successful playing career with the Whites and cut his managerial teeth with Coventry before leaving the game to care for his sick wife.The former Scotland international is believed to be keen on returning to management and a return to Leeds could be on the cards.
Read more
- October 01, 2006 New pages uploaded at mightyleeds.co.uk 21 May 2006 - Leeds United 0 Watford 3 In the most valuable sporting event of all time, United took 40,000 fans to Cardiff - shame the team failed to turn up on and do them justice on a desperately disappointing day Read the full story at http://www.mightyleeds.co.uk/matches/20060508.htm
Read more
More posts