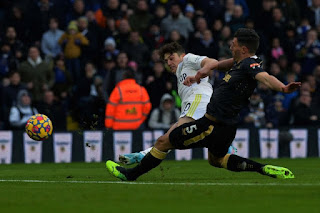 Whatever it is that Leeds United need right now is up for debate, but they are lacking something.

At times, often in fact, during a bitterly disappointing 1-0 defeat by Newcastle United, one that bore all the hallmarks of a huge opportunity let slip, it was Patrick Bamford they were lacking.

In Daniel James they had a willing and able presser of Martin Dúbravka and his defenders. Adam Forshaw, commentating for LUTV, put it this way: "Daniel James does so much good work off the ball. The intelligence of his runs to stop them playing is really good."

In James they had a speedster, able to get in behind and worry the defence.

He was a nuisance and he was dangerous, because chances did come his way, but when they did he was unable to take them. There were chances left out on the pitch because when balls flashed across the area he wasn't always in the places you could so easily imagine Bamford being.

In James they did not have a natural centre forward.

Bamford remains out after what can now be described as a series of injuries. First it was his ankle, damaged at Newcastle in September, then it was his hamstring, damaged celebrating a goal on his comeback. After that there was a knock below his hip and now it's his sole that's the problem.

At every stage he has been a big miss but against Newcastle, whether Leeds were creating good quality chances or sending hopeful balls forward, his absence was huge.

There were also times, when play became chaotic or when Leeds' decision-making let them down, that Leeds lacked Forshaw.

They lacked control, something Forshaw can bring with his defensive interventions and the simplicity of his in-possession game and when the game was crying out for a foot on the ball and a cool head, he was sitting up in the West Stand media gantry nursing a mercifully minor hamstring strain.

He will 'definitely' return to face Aston Villa, he said, delivering some good news on an afternoon that started so well and held so much promise before ending so badly.

Raphinha was straight into it on the right, Rodrigo showed the problems he can cause through the middle when he's sharp and Jack Harrison was at it on the left.

They were all heavily involved as Leeds hit their visitors from both flanks, James denied by a smart Dúbravka save before dangerous deliveries whizzed through the area from Harrison and Mateusz Klich without the necessary final touch.

Rodrigo's outside of the boot ball exposed Kieran Trippier completely and put Harrison in space to cross dangerously again but Raphinha's attempted header was blocked.

Newcastle had moments and Jonjo Shelvey's well-hit volley through a crowd was the pick of them, Illan Meslier saving without too much fuss. Leeds had more, though. Raphinha left Paul Dummett for dead and clipped a ball into the area.

Harrison played Rodrigo in behind Trippier and although he got to the area, his shot was blocked.

The pace was frenetic and the game opened up, which took a toll. Joelinton was unable to run off an early thigh problem and Rodrigo began to show the effects of a lack of game time.

Luke Ayling sent in a wicked cross from the right only for James and Raphinha to get in each other's way at the near post. Had one darted between the centre-backs, it would have been a goal.

The second half was even more hectic than the first and a lot more even.

James drifted into the area from the right wing and with players begging for a cut-back, played a nice pass across the face of goal to where Bamford would have been, the ball rolling harmlessly out of play.

As the game neared the hour mark it was end to end, the sides trading blows without doing damage to the scoreline. Allan Saint Maximin saw a shot blocked at one end and Rodrigo sent Raphinha clear at the other only for the final ball to elude him.

A madcap spell only came to an end when Dummett went down, off the ball, and eventually made his way off to be replaced by Javier Manquillo, although not before seeing a yellow card for time wasting. Whether or not it was by design, Dummett's actions gave Newcastle a breather when they were gasping.

When play restarted Rodrigo found a second wind and another outside of the boot pass put Raphinha in space, the Brazilian picking out Harrison who scampered into a good shooting position only to see his effort deflect off target.

Dummett was followed down the tunnel by Lascelles with 23 left, Clark coming in to complete a treble of injury-enforced changes for Howe. Bielsa only used his first substitution on 70 minutes, Tyler Roberts replacing James.

Five minutes later the replacement failed to get a pass away in the opposition half, Newcastle broke and Diego Llorente felt forced to foul Manquillo. The yellow card it brought was the least of Leeds' worries as Shelvey's free-kick somehow eluded Meslier's grasp and found the bottom corner.

Although Ayling sent in another great cross, with no one in place to attack it, Leeds were more at risk of conceding a second than Newcastle were of letting slip their lead.

Meslier came close to another nightmare as Ryan Fraser's low cross went through him and had to be cleared out of the goalmouth by Llorente.

With 10 to go Bielsa sent on Joe Gelhardt for Klich, who sent someone's jacket flying, booting it furiously across the technical area.

The Pole's mood will not have been helped by Leeds' struggles to do the right thing in possession late on as quality and composure deserted them. They lacked someone who could create the golden chance.

Meslier saved from Willock in the third of five added minutes to at least give Leeds a chance of a point in the game's dying embers, but it was a day when they needed more than time.

When it ran out, Newcastle had their first away victory since May and Leeds had blown a big chance.

The aftermath of a loss like this is not the time to make definitive conclusions on what it is Leeds need and bodies, in the form of proven players, will start to return from the treatment room after the international break. The big hope is that Bamford and Forshaw will be among the first to do so. They could do with a little luck on both the injury front, never mind in games.

But across the season so far there has been enough evidence to say they still need something, someone from the remaining eight days of the transfer window.

Brenden Aaronson, an energetic chance creator, appears ideal. A goalkeeper with experience would be too and that still feels like the bare minimum, because the second half of the season is not the time to be found lacking.