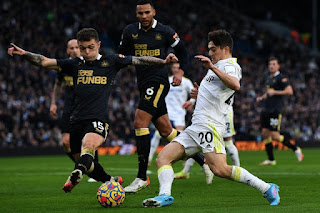 THE passing of rock legend Meat Loaf is being lamented by many and his classic songs duly remembered.

Unfortunately, that is not certain – with Marcelo Bielsa confirming after Saturday’s exercise in frustration that he has his doubts as to whether the centre forward will return to action when Leeds resume after the winter break at Aston Villa on February 9.

In terms of Premier League results so far in 2022, two wins out of three certainly ain’t bad as far as Leeds are concerned. Yet, some games are bigger than others.

Newcastle – without an away win and clean sheet on their travels since May – were afforded the kiss of life in their survival fight and celebrated with justification at the final whistle.

It felt like a big moment in their troubled season.

The sun on their backs during their training camp in Saudi Arabia will be feeling that bit warmer, while the shivers will be felt on the blue half of Merseyside, Watford and elsewhere.

After Saturday’s events, there was an undeniable sense of deflation for Leeds and some concern on a day when a victory would have moved them nine points away from the relegation zone and looking towards mid-table.

Perhaps the biggest worry should relate to comments made afterwards by Newcastle manager Eddie Howe.

He stated that his side’s cherished win was not the sort of ‘backs-against-the-wall’ victory you associate with a relegation-threatened side gasping for air.

After Jonjo Shelvey’s free-kick squirmed past Illan Meslier 15 minutes from time, there was no onslaught from Leeds, far from it. If anyone looked like getting another goal, it was Newcastle as Howe correctly opined.

Leeds, who had previously held their nerve in key wins against fellow strugglers Burnley, Watford and Norwich, progressively got worse as the game went on.

They were tidy enough between the thirds for most of the game.

Regrettably, their final ball and decision-making in the final third left a fair bit to be desired.

It was the sort of performance that Bielsa’s Leeds also do sadly throw in from time to time.

Towards the end of the game, it was aimless with Leeds guilty of running out of ideas and demonstrably lacking someone to play off at the top end of the pitch in the ilk of Bamford.

Speaking after the game, Alan Shearer – a fair pundit whose views about centre forwards are always worth listening to – said as much. Leeds lack presence in the box and few would argue.

Dan James, for all his willingness and prodigious energy levels, is a classic square peg in a round hole at centre forward. He had United’s best two chances on the day, but lacked conviction and a killer’s instinct with either. It is not his fault, he is not a centre forward when all is said and done.

Watch closely enough and there was a slight hesitation ahead of his first chance, carved out by the ingenuity of Rodrigo and Raphinha.

Martin Dubravka stayed big and made a key block, but the ball should have nestled in the back of the net in truth.

James’s reaction just after the hour mark when he meekly steered the loose ball – almost apologetically – into Dubravka’s arms instead of the goal after Jack Harrison’s shot deflected invitingly towards him at the back post then said it all.

James would later exit the fray. His replacement Tyler Roberts was ineffectual, with the called-for introduction of Joe Gelhardt arriving late when Newcastle’s defence were set in for the night and had something to protect.

This was no classic display from the visitors, yet it did not have to be in the final analysis.

They competed and fought and possessed a dangerous outlet on the break in the mercurial Allan Saint-Maximin. They also broke up play at regular junctures with players almost seeming to take it in turns to go down at times and receive attention. It successfully stymied Leeds.

Newcastle are also abundant with players with top-flight nous, including the game’s key figure in Shelvey, who went as close as anyone in the first half with his fine left-foot volley being beaten away splendidly by Meslier.

The next moment involving the pair had more fateful repercussions for the home keeper.

Shelvey’s free-kick, this time with his right foot, was relatively tame, if truth be told.

Meslier’s first error saw him momentarily shift his body weight in expectation of the shot drifting to his right. Instead it arrowed to his left.

The keeper tried to readjust, only to be seemingly put off by the movement of Newcastle defender Fabian Schar who made a movement towards the ball.

That was compounded by his failure to deal with a shot which was by no means venomous.

There was no grandstand finish from the hosts. Instead, Joe Willock went close to a second and it was Newcastle who pushed for the second goal en route to just their second league win of a hard campaign.

For Leeds, a season which has not been straightforward is far from being settled.