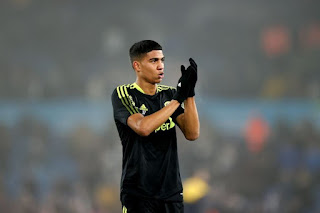 By Phil Hay and Jacob Whitehead

Leeds United full-back Cody Drameh is set to join Cardiff City on loan until the end of the season.

The Athletic understands that the deal will not include an option to buy.

Drameh, 20, was keen for more regular football, having only featured three times for Leeds in the Premier League this season.

Luke Ayling and Stuart Dallas have been chosen ahead of him at right-back this season.

Drameh joined Leeds from Fulham in the summer of 2020 and has impressed for the Under-23 side.

Cardiff are currently 20th in the Championship, and at risk of slipping into a relegation battle. Drameh will provide competition for right wing-back Perry Ng.

They next play Blackburn Rovers on Saturday.

Why have Leeds decided to loan him out?

This looks at face value like a strange decision and the impression Leeds were giving at the start of the window was that the squad was too thin for fringe players to leave.

The Athletic understands that Drameh was keen for more regular first-team football and after discussions with his agent, Leeds have decided to let him leave for Cardiff until the end of the season. The loan is not expected to include any option to buy.

Does this mean Leeds will dip into the market to build on the squad?

The area Leeds are targeting primarily is the centre of midfield and they were in need of reinforcements before negotiations with Cardiff over Drameh began.

The injury list is severe and has been for many weeks now. Marcelo Bielsa is in a position where every one of his strikers is carrying a problem of some sort. But at first-team level, there has been no incoming movement as yet.
Cody Drameh