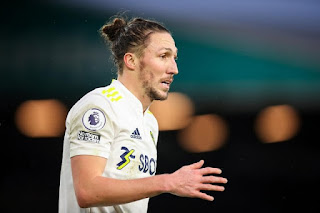 Leeds United defender Luke Ayling has praised the Whites' most recent clutch of Premier League debutants and explained how he has helped them to settle.

Now in his sixth season at Elland Road, the 30-year-old is one of the club's most senior players and is acting as captain while Liam Cooper recovers from a thigh injury.

During United's 3-2 victory over West Ham United on Sunday, the right-back was among those playing out of position in response to the ongoing injury crisis in LS11, starting the game in a centre-back pairing with Pascal Struijk.

With a 1-0 lead at the midway point of the first half, Leeds' early progress looked threatened by the emergence of injuries to Adam Forshaw and Junior Firpo, prompting further reshuffling in Marcelo Bielsa's side.

The Argentine was forced to bring the two players off and replace them with Premier League debutants, 18-year-old defender Leo Hjelde and 19-year-old midfielder Lewis Bate.

The pair are the latest of a long list of academy players thrown into top-flight action this term, and their introduction broke records this weekend by making Leeds the first team in Premier League history to hand eight teenagers debuts in one season.

Joe Gelhardt, Stuart McKinstry, Crysencio Summerville, Charlie Cresswell, Sam Greenwood and Cody Drameh have all played their part in plugging the first-team gaps while Whites Head of Medicine Rob Price has worked to bring a series of senior players back to full health.

Ahead of the game this weekend, Ayling gave credit to the academy players making the step up and outlined his responsibility toward the youngsters.

"For me personally I just try to make them feel welcome in the first team group," Ayling explained.

"They’ve been training with us for over a year now so they’re pretty much used to us.

"When they do get their chance, on gameday, for me, it’s just making them feel part of the group and so far everyone that has come up has done really well.

"Hopefully there’s still a few more to come through we’ve still got some good young talent that haven’t broke through, but I’m sure their time will come.

"For me it’s just knowing how I felt as a young lad, going up into a first team and trying to make them feel as much part of it as we can."

The defender took the opportunity to reminisce about his own time as a young player, and spelled out the reason behind his long-standing nickname, Bill.

"At scholarship level there was me and another lad called Luke Freeman in the team and for some reason, everybody was called Bill in my youth team," Ayling told LUTV.

"It was quite a weird one like everyone had a Bill and then a second bit so like Billy Nose for Craig Eastman, a few others.

"But for some reason, mine has just stuck and I’ve just carried it on."