Showing posts from June, 2011
Show All
- June 28, 2011
New pages uploaded at mightyleeds.co.uk Match – 7 October 1972 – Leeds United 5 Derby County 0 A blinding performance by Don Revie's men and five blistering goals produced a result that represented some restitution for having the League title snatched from within their grasp the previous May Read the full story at http://www.mightyleeds.co.uk/matches/19721007.htm Match – 23 September 1972 – Newcastle United 3 Leeds United 2 Four goals in the opening eight minutes in a classic encounter in the North East which saw United go down by the odd goal. Don Revie: "This type of football must bring the crowds back." Read the full story at http://www.mightyleeds.co.uk/matches/19720923.htm Players Rod Belfitt – Reliable grafter Belfitt managed less than 80 League appearances in eight years with United but was always ready to answer Don Revie's call when it came and rarely let the side down, particularly in knockout competitions Read the full story at http://www.
Read more
- June 26, 2011 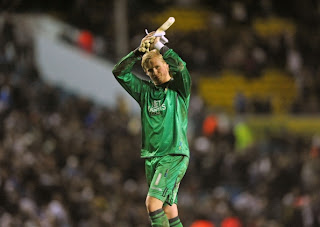 Yorkshire Evening Post 25/6/11 Leeds United wait on Schmeichel outcome Leeds United will discover the outcome of talks between Kasper Schmeichel and Leicester City early next week, with doubts persisting about the result of negotiations. United have effectively ended Schmeichel’s career at Elland Road by stating that he will have no prominent role in their first-team plans next season, and representatives of the Danish goalkeeper are believed to have opened discussions with Leicester on Thursday. City saw a seven-figure offer for Schmeichel accepted this week, leading to statements from United confirming that Schmeichel would be replaced as their first-choice keeper this summer, and Leeds are looking to see the transfer tied up before their squad report back to Thorp Arch for pre-season training in four days’ time. Schmeichel and Leicester are considering their positions over the weekend, but sources in the Midlands continue to indicate that he is one of a number of keepers who City
Read more
- June 25, 2011
Yorkshire Evening Post 22/6/11 Leeds United Boss keen to ring defensive changes The facts surrounding Kasper Schmeichel’s proposed sale to Leicester City were confused at best and troubling at worst. When the announcement came, some took it as a sign of Leeds United’s willingness to trade valuable players as soon as the price was right. The club’s manager, Simon Grayson, justified the deal by stating it would maximise the return on a goalkeeper whose contract expires in 2012. Grayson claimed there was no prospect of extending that contract; Schmeichel reacted with surprise, saying no offer had ever been put to him. The only certainty was that a transfer involving Schmeichel had not been mooted at the Dane’s request. News of the agreement and the financial considerations behind it raised the question of what might happen if other prized members of Grayson’s squad attracted persuasive interest as the summer wore on. Robert Snodgrass has already been the subject of one offer from Norwich
Read more
- June 25, 2011
Yorkshire Evening Post 20/6/11 Schmeichel hits back as Leeds United accept Leicester City bid By Leon Wobschall Kasper Schmichel insists he is being forced out of Leeds United after the club accepted an undisclosed bid from npower Championship rivals Leicester City for his services. The Danish international stopper, 24, who has a year left on his contract after joining United just 13 months ago, said he was happy at Elland Road and looking forward to playing his part in a promotion crusade in 2010-11. Schmeichel’s exit would leave United without a recognised first-team keeper on their books, with last season’s No.2, Shane Higgs, released at the end of last term. But Whites boss Simon Grayson has insisted the deal is “in the best interests of Leeds United”, with Schmeichel said to be unwilling to commit his long-term future to the club. A statement issued on behalf of Schmeichel by his representatives read: “At the end of the season, Leeds United and I both made a commitment to honour
Read more
- June 25, 2011
Guardian 17/6/11 Ken Bates faces parliamentary probe into Leeds United ownership saga Conservative MP Damian Collins wants government inquiry Matt Scott The MP Damian Collins wants a government inquiry into the circumstances around the sale of Leeds United to Ken Bates. Ken Bates will face a parliamentary demand for a government inquiry on Tuesday in order to disclose every detail of the transactions that led to his taking over Leeds United. The former Chelsea owner has been chairman of the Championship club since 2005 – barring a short period during the club's 2007 administration – during which time he served two separate consortiums of anonymous offshore owners. The obfuscated ownership structure finally came to an end last month, when Bates took over 73% of the club in a transaction whose cost has not been disclosed. But the lack of transparency remains a major concern of the ongoing parliamentary inquiry into football governance. Now Damian Collins, the Conservative MP who s
Read more
- June 11, 2011

leedsunited.com 8/6/11 CHAIRMAN ON POSSIBLE SMITH MOVE Ken Bates responds to Smith speculation... United chairman Ken Bates has refused to rule out a possible move for former Elland Road youngster Alan Smith. Media speculation about a possible Elland Road return for the 30-year-old started within moments of it being announced that Newcastle were willing to let the midfielder leave the club. Speaking exclusively to Yorkshire Radio, the Leeds chairman said: "It depends on whether Simon wants him which is his decision. "We have to be careful because he has had a poor injury record and what we can't afford to do is sign someone who can't play. We have at least eight more matches than in the Premiership. "The other thing is his wages. He has been at Manchester United and Newcastle so his wages are in a stratosphere, probably well over the seven-figure medium, so if he did join us he would have to knock a nought off and maybe half it
Read more
- June 04, 2011
leedsunited.com 3/6/11 CLUB CONFIRMS ENQUIRIES Leeds United can confirm that we have received a number of enquires from both home and abroad in relation to our players. Leeds United CEO Shaun Harvey said: "It would be naïve to believe that we would not receive any enquiries about our players who, collectively, achieved a seventh place finish in the Championship last season. "We will continue our policy of not commenting on specific speculation, but would re-iterate our position that any players leaving will only do so in those circumstances that we believe represents the best interests of the club and has the full support of Simon Grayson. "Our recruitment plans continue quietly behind the scenes and we have no intention of making public our targets."
Read more
More posts