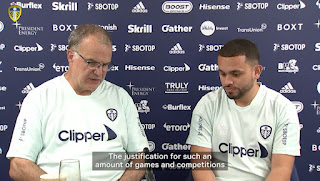 Marcelo Bielsa’s injury-ravaged side produced a stunning upset at the London Stadium but, for the top-four race, it will leave a sense of injustice

It was a not just victory but vindication; not just a vital three points for Leeds but for all the teams and supporters left embittered by the opportune postponement of the north London derby. After Marcelo Bielsa’s injury-ravaged squad pulled off a battling, breathtaking 3-2 victory over a weary West Ham on Sunday, the prevailing sentiment was that justice had been done and that the nature of Leeds’ performance showed the virtues of playing on.

In the immediate aftermath, perhaps that was right too. While Arsenal’s predicament has been to some degree self-inflicted, Leeds’ list of casualties this season has amounted to a permacrisis. They arrived at the London Stadium without seven first-team players, including Kalvin Phillips and Patrick Bamford, and filled their bench with would-be debutants.

And yet, from the ever-ruminating Bielsa, there had been no excuses. On the pitch, his players embodied that fighting spirit and, although Jack Harrison’s hat-trick and Raphinha’s beguiling skill took the plaudits, it was a true team effort, with Leeds’ resolve to chase every ball down to its dying breath undeterred by further injuries to Adam Forshaw and Junior Firpo. It was an upset founded on bravery and willpower, and when set against Arsenal’s cynicism, few qualities can seem as addictively honest as those.

Once the initial anger has subsided, though, it’s fair to assume that the reality is not quite so black and white. After their previously postponed fixture against Norwich City was rescheduled for Wednesday, David Moyes’s side were playing their third game in the space of eight days. It doesn’t excuse the sloppy mistakes made in defence, with Issa Diop particularly culpable, but there was an unsurprising sluggishness about West Ham’s players, a fatigue that was carried into the game and then revealed further by Leeds’ frenetic pace.

“We missed one game and not by our doing and we were made to go again at this point in the season,” Moyes pointed out afterwards. “We had a busy Christmas period like everybody else, like Leeds, but Leeds have two games to play, and were not asked to play midweek. I cannot understand it and it only tells me that the people making those decisions do not understand what recovery means, what it means to play games on a regular basis and the people putting the games are getting that wrong for sure.”

On the one hand, it’s inevitable. So many Premier League games have been postponed - 20 and counting - that there is little choice but to sandwich them in the calendar at untimely intervals. To a certain degree, all clubs will have to accept fixtures on an imperfect basis purely because there is no easy solution. But there is still a clear concern when a team such as West Ham on Sunday, grappling to retain their place in the top four, is put at a disadvantage for reasons entirely outside of their control. In many respects, finding some sort of balance when it comes to how matches are rescheduled should be of as great a concern going forwards as the legitimacy of calling them off.

After all, it seems the parameters for postponement are unlikely to change mid-season - regardless of how debatable or exploitable those rules are now proving to be. As the number of games being called off accelerated in December, a lack of transparency between Covid cases and injuries - and what actually qualifies as a pain players shouldn’t be expected to play through - has been a consistent problem, even if Arsenal’s decision to loan out Ainsley Maitland-Niles and Folarin Balogun has made their specific case far more incendiary. It’s a flaw in the Premier League’s system that can’t easily be corrected. Leeds fell just below that threshold while Arsenal - despite having only one Covid case - were just above. Few clubs can genuinely profess that they wouldn’t have followed suit, and from a more general standpoint any cut-off line is bound to create contentiousness.

But while Leeds’ performance was undeniably heroic, there’s a case for not normalising unprecedented circumstances too. Yes, a club like Arsenal can - and probably should - lean more on their academy, especially considering the depth of resources at their disposal. But Covid absences, an already congested calendar and now a constant need to plug gaps are putting an intense strain on players. They are pushing the brink of the pain barrier and rushing back from injury prematurely. Fixtures are going to be condensed further and it’s very feasible that the crises at Leeds and Leicester, who are currently missing as many as 16 first-team players, will become increasingly common. Their courage should be celebrated, but playing on regardless isn’t always going to be sustainable.

In the end, Leeds had no choice, and they rose to the challenge spectacularly. West Ham might not have deserved anything from the game, but the scheduling still worked against them. And on a day where Arsenal didn’t kick a ball, they emerged with a significant leg-up in their top-four pursuit. Leeds’ victory might have been stunning, but that still doesn’t seem like justice.