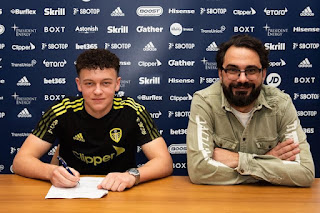 The 18-year-old has signed a two-and-a-half-year deal that runs until the summer of 2024 having impressed for Mark Jackson's Under 23s. The promotion of Charlie Cresswell to the senior set-up due to injuries among Marcelo Bielsa' s centre-half group has given Moore opportunities to step up from the Under 18s. Jackson has played him at right-back and in the centre of defence where he has looked most comfortable and shown a good range of passing.

It's 17 months since Moore penned a two-year scholarship at Thorp Arch and his progress since has led to a pro deal. He's made 14 appearances for the Under 23s in Premier League 2 action and Marcelo Bielsa has included him among his first team substitutes on three occasions this season.

Midfielders that might fit the bill for what Leeds United are after in the January transfer window. #lufc https://t.co/If1ifY4UoJ

With Liam Cooper and Charlie Cresswell injured, Diego Llorente suspended and Pascal Struijk doubtful for the Premier League trip to West Ham United on Sunday it's likely Moore will at least be involved in the travelling party.

Bielsa has given a number of first team debuts to Jackson's youngsters this season, including Stuart McKinstry, Lewis Bate, Sam Greenwood, Leo Hjelde and Joe Gelhardt, while 15-year-old Archie Gray has made the bench for a Premier League game as the Whites bolster an injury-hit squad with youth.