By Phil Hay and Mark Carey

Away from the perennial subject of injuries, Adam Forshaw can be used to explain why Leeds United’s recruitment plans are focusing on their midfield. A week on Tuesday marks four years since Forshaw joined Leeds and he is, remarkably, the last oven-ready central midfielder signed by the club permanently.

It figures, then, that attention on the thin resources available to fill that area of the pitch has intensified at Elland Road. In terms of Leeds investing in central midfield specifically, the interlude has been as long as it feels. They had Lewis Baker, who rarely played and cut short his spell as a result, on loan from Chelsea and bids for Michael Cuisance and Conor Gallagher went awry but the timeline since Forshaw’s arrival is indicative of how much the club have been asking of long-serving players.

Injuries prevented Leeds from asking too much of Forshaw himself and four years on the books have allowed him to amass just 65 appearances, marginally more than Illan Meslier, who made his debut for the club midway through 2020. But as Leeds consider how to address their midfield options in this transfer window and beyond, Forshaw’s resurgence since recovering from an unusually complex lay-off should present him with the chance to extend his career with Leeds further.

The contract he agreed in January 2018, sealing a £4.5 million transfer from Middlesbrough, expires at the end of this season, making him the only player of note in Marcelo Bielsa’s squad whose future is not secure. The Athletic understands, however, that Leeds and Forshaw’s representatives are in active discussions about an extension to that deal and are optimistic of reaching an agreement. Leeds supported Forshaw through almost two years of surgery and rehabilitation and have seen enough in him post-comeback to want to avoid a scenario where they lose him for nothing.

For much of the period where a hip and groin issue prevented him from playing, the question around Forshaw was whether he would recover to a degree that allowed him to play again for Leeds at all. In the weeks after he appeared as a substitute in a 1-0 defeat at Southampton in October, his first league game in more than 700 days, attention turned to wondering how well his body would hold up to the strain of regular, top-level football. The answer has come from appearances running into double figures, with nothing to suggest that Forshaw is struggling to cope.

The 30-year-old has been a proactive and energetic presence in Bielsa’s midfield, to the surprise of his head coach. Bielsa holds a very high opinion of Forshaw’s ability but admitted recently that as time passed an unfit Forshaw by, he began to doubt that the former Everton trainee would ever be able to perform so well. The distance covered by Forshaw in individual games, peaking at more than 12 kilometres over 90 minutes, ranks alongside the best running stats in the Premier League and his coverage of the field was a factor in Sunday’s 3-1 win over Burnley.

Forshaw has been operating latterly as Bielsa’s replacement for Kalvin Phillips, whose hamstring surgery could keep him out until March. Forshaw, in the Bielsa era, has always been the closest match to Phillips in a defensive midfield sense but the pair are far from identical and Forshaw’s industry and mobility have been the striking aspects of his return from an exceptionally long absence. Aside from heavy defeats to Manchester City and Arsenal — two games in which Leeds performed poorly collectively and were badly depleted by injuries — he has helped Bielsa’s side to stay in games and keep their points total ticking over little by little.

Forshaw’s exact role is changeable, sometimes asking him to occupy a deep-lying zone and sometimes looking for him to push further forward. As the following graphic shows, he has the legs and the appetite to go box-to-box. His activity inside the penalty areas is limited but the plot of his shots, passes, defensive actions and other touches gives a vivid impression of how much he gets around the pitch. He has been most active in the sector in front of Bielsa’s defence but also good at switching onto the flanks and pressing into the opposition’s half. Essentially, Bielsa can depend on him to add a layer of protection but also to venture upfield when the opportunity presents itself. 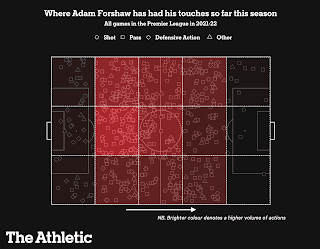 Defensively, his style increases the possibility of turnovers in advanced attacking positions, situations Bielsa likes his teams to pounce on. Recovering the ball is one of Phillips’ major strengths but Forshaw is good at hunting it down too and in Leeds’ 1-1 draw with Leicester City on November 7 — perhaps the club’s strongest performance of the season — the pair regained possession 20 times between them. Like his touches in general, Forshaw’s defensive actions (below) are spread around the field and demonstrate how involved Forshaw tries to be. Much of his defending is done in Leeds’ final third but he has a keen influence on the flanks too, particularly down the left. 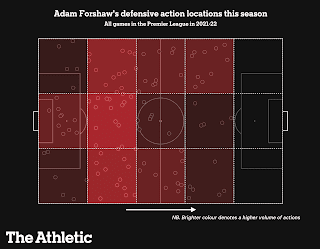 One of Forshaw’s big strengths is the quality of his tackling and his willingness to stick a foot in. His injury problems have not made him cautious in one-on-one battles. The “true tackles” metric is one method of assessing the quality of a player’s challenges by factoring in fouls committed and tackles lost to give an accurate picture of how defensively effective a footballer is. Compared to other midfielders in the Premier League, Forshaw is near the top end of the scale, someone Bielsa can trust to vie for the ball and come away with it. His interceptions and his success in aerial challenges are in the middle ground but as a whole, he has succeeded in meeting the standards of the division. 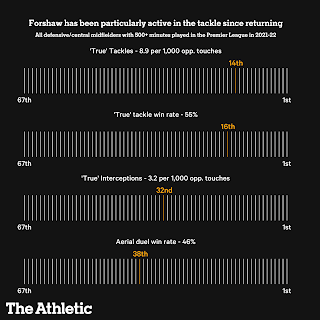 Stylistically, Forshaw prefers shorter passes over longer balls but the accuracy of his long-range passing, at 70 per cent, is the fifth-highest of the 67 midfielders with 500 or more minutes this season. He is relatively good at retaining possession (see next graphic) and his percentage of passes played forward, 31 per cent, is what you would expect of a player who ticks over in the way that Forshaw does. His strong display against Leicester, to use that example again, was as much about his attempts to keep the ball moving generally as it was to specifically send the ball forward. His work helped other players to be progressive with their passing. 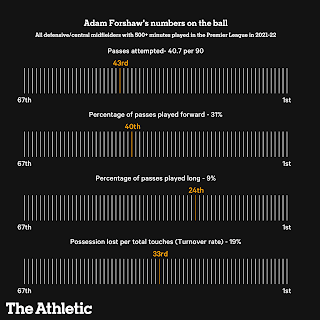 The next chart compiled using smarterscout’s data shows just how much link-up play Forshaw features in (ie, playing short, simple passes to a nearby team-mate). He is suited to Bielsa’s tactics because Leeds are set up to retain possession and cut through teams with quick exchanges of passes. Forshaw’s influence in creating chances (represented below by his scores in xG from shot creation and ball progression) is limited but that is no great surprise given the defensive responsibilities he has. He comes up with a chance a game and is not far off a shot a game either. This graphic also shows his talent for disrupting opposition attacks, reinforcing the aforementioned propensity to stick a foot in. 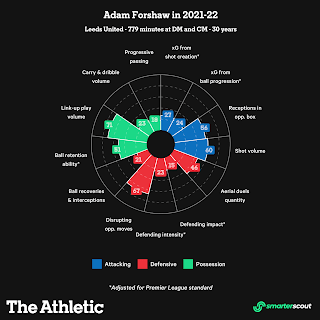 Unsurprisingly, his technical stats are aided by some very impressive physical output. Analysis by SkillCorner reveals that Forshaw is covering an average of 10.9km per 90 minutes, which is among the highest of Premier League midfielders who have played nine or more matches this season and completed at least 60 minutes in all of those games. But more interesting again are the results when the numbers are broken down into more detail.

Forshaw’s “running distance” — the distance covered when a player is moving at a speed between four and five metres per second — is strong among his peers, and his high-speed running distance (sprinting at speeds between 5.5 and seven metres per second) is also right up there within his midfield cohort. This highlights the fact that Forshaw not only covers a lot of ground but does so at pace and with intensity.

The conclusion here is that Forshaw seems at home in the Premier League, on a technical front and a physical one. In spite of the months lost to injury, the argument for handing him a new contract is easy to make on the basis of his comeback. That Leeds have done so little to the centre of their midfield since signing Forshaw in 2018 is precisely why recruitment there is needed, and it is needed regardless of whether Forshaw agrees to new terms or not. There is obvious scope for Leeds to be more dynamic, more imaginative and more ambitious in an area where they have relied on the same faces for so long. But in the grand plan, there is ample space for Forshaw too.