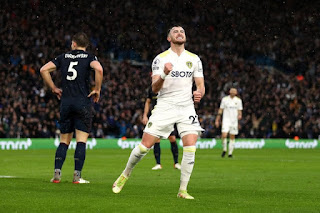 Jack Harrison is looking onwards and upwards after the start of 2022 brought the winger some Leeds United relief.

The 25-year-old admitted that his run without a goal led to self doubts but the former Manchester City player said he attempted to press the reset button and was left delighted when netting the opening goal of the game in the 3-1 win against the Clarets.

"I think it was more of a relief more than anything," said Harrison in an interview on Soccer AM, reflecting on netting his first goal of the season.

"I've been working hard all season.

"I think I have been a bit unfortunate with injuries and I had Covid and just being out with one thing and the other.

"So to finally get the goal was just a relief more than anything and I'm hoping to get some more from here on out."

Assessing the mental challenges of having a long run without a goal, Harrison admitted: "It's something you think about a lot, you think maybe what am I doing wrong, you start questioning all the things that have worked for you in the past.

"You start questioning should I continue doing this or doing this because I like to do a lot of extra work as well and I was thinking maybe it's a bit more detrimental now, it's not beneficial.

"But I had to try and reset myself, thinking outside of the box a little bit and try to find those things that do work for me 100 per cent and just continue doing them.

"And I think you have to have faith as well.

"Sometimes when you are doing all the right things and it's not coming off, it's just a process and you just have to stick to what you know is right and eventually it will turn in your favour."