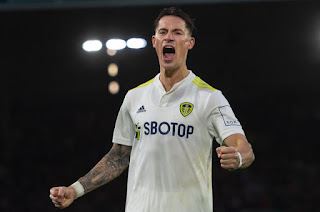 Robin Koch is eyeing an historic Leeds United feat upon his return to the Whites side, the German now relishing the prospect of his first taste of the FA Cup.

Koch's start to his second season at Leeds was cut short after featuring in the opening weekend Premier League loss at Manchester United, after which the defender eventually headed to the USA for minor surgery to repair small damage to his pubis area.

The 25-year-old returned to the side for last month's 4-1 league defeat at home to Arsenal but then helped Leeds to their fourth win of the current top-flight campaign when playing the full duration of last weekend's 3-1 triumph at home to Burnley.

Sunday's third round FA Cup clash at West Ham is next and Koch - who missed last season's third round defeat at Crawley Town - is relishing the prospect of tackling the competition for the first time, particularly in a historic year for the Whites.

Under legendary former boss Don Revie, United's team of club legends won the FA Cup 50 years ago this season, beating Arsenal in the final for what remains their sole lifting of the historic cup.

"Hopefully we can repeat it this year!" said Koch, pressed on United's achievements of 1972 when speaking on LUTV's The Warm Up show.

"For me every game is special and a cup game is a knockout game every round and I think this is a special thing about this game.

"I am excited for this game."

Reflecting on his recent return to the side, and sending a message to United's fans in assessing the atmosphere for last weekend's victory against Burnley, Koch said: "The win for us last weekend was so important.

"We knew it was a big game so the three points were really important for us.

"With the fans in the stands, it is always important for us, especially in those important games.

"The fans pushed us forward and, especially when we are at home, this is a big help for everyone on the pitch.

"It feels good to be back with a win.

"The spirit in the team is good and now we go for the next games."