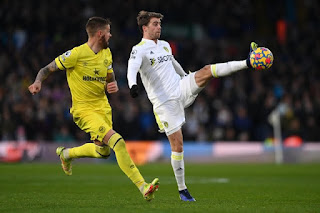 Gelhardt picked up an ankle injury in training this week, while Roberts limped off against Burnley with what appeared to be a calf issue. The pair could be out for a month, leaving Bielsa with a newly-fit Bamford, wingers Daniel James and Jack Harrison and Under 23s striker Sam Greenwood as his attacking options.

Bamford returned from a September ankle injury that kept him out for nine games, only to injure his hamstring celebrating a late equaliser against Brentford and sit out the last six.

"As it has been happening habitually this season, players are injuring themselves in the same position," said Bielsa.

"So to the injury of Bamford and Rodrigo, we add that the injury to Tyler Roberts and Gelhardt who injured his ankle in training yesterday and he's going to be absent for three weeks. Tyler Roberts a similar amount of time. The return of Rodrigo we don't have a precise date. Bamford is likely to be able to play the game on Sunday."

Bielsa has been without Pascal Struijk since the end of November due to a rare injury that occurred when two bones in his foot collided, while record signing Rodrigo has been unavailable for Leeds' last six games due to heel pain.

Kalvin Phillips and Liam Cooper are among Bielsa's longer-term injury victims and not expected to make their comebacks until March, while Jamie Shackleton has been struggling with an Achilles problem and Charlie Cresswell has a shoulder issue.

"We can end on this subject of injuries - Phillips and Cooper until March, Shackleton and Cresswell after the international break and Pascal and Rodrigo we can't predict. Roberts and Gelhardt approximately a month," said Bielsa, who was unwilling to confirm if he will be handing out debuts to youngsters at London Stadium on Sunday.

"Responding to a suggestion I received in a press conference previously, I can't give any information that could infer the formation," he added.

"With respect to the injuries as I'm constantly interrogated, I have no other remedy than to comment on it."