West Ham 2-0 Leeds: Manuel Lanzini and Jarrod Bowen fire David Moyes' side into round four of the FA Cup - Mail 9/1/22 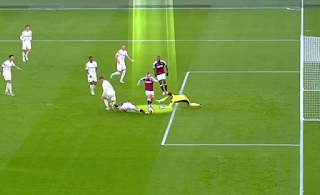 West Ham 2-0 Leeds: Manuel Lanzini and Jarrod Bowen fire David Moyes' side into round four of the FA Cup as the visitors have their bubble burst in east London

Just nine of the 32 third round ties had VAR in operation. This was one of those that did and it appeared to make little difference.

This low-key affair was all but settled by a goal controversially awarded to West Ham despite VAR Peter Bankes and his team having the opportunity to review the incident over and over again.

Amid a first-half scramble in the Leeds box, Jarrod Bowen's intervention from an offside position was overlooked and Manuel Lanzini's goal was given.

There was no debate about Bowen's clinical finish with the last kick of the game but the defining moment was the questionable first-half call.

What was not in doubt was that, ultimately, West Ham deserved the place in round four having done most of the running at the London Stadium.

But Leeds had good grounds to feel aggrieved at the goal that set them on the way to a fifth successive third round exit as their remarkable FA Cup hoodoo continued.

Decimated – missing 10 players – and youthful as a result, with Marcelo Bielsa forced to hand full debuts to Lewis Bate, Leo Hjelde and a first start to Sam Greenwood – all three teenagers – the goal that gave them an uphill task would have been a hard one to accept.

This fixture, which will take place again in the Premier League on Sunday, was picked for TV to some consternation.

The first half hour was not much of an advert for the competition or justification of that decision.

Then came some messy defending from Leeds and, finally, a major talking point.

Nikola Vlasic gathered in Michail Antonio's cross and wriggled away Hjelde who stuck to his task well to hold up the Croatian with a last-ditch tackle.

Illan Meslier tried to grab the loose ball but missed, Junior Firpo attempted to kick it clear though only succeeding in presenting it to Lanzini who gleefully swept the opener into the net.

While Lanzini ran off to one of the corners celebrating with that familiar, West Ham, arms crossed gesture, Leeds protested and, it appeared, with good reason.

Meslier's effort to tidy up the situation was hampered by a seemingly offside Bowen.

As the VAR check continued, Leeds seemed so certain the goal would be chalked off Ayling returned the ball from halfway to his goalkeeper to restart the game with a free-kick.

But, to some surprise, Stuart Attwell pointed to the spot and West Ham led despite Bowen's interference. By half-time their advantage should have been greater.

Antonio fired one effort wide on the stretch and Ryan Fredericks was unable to apply the finishing touch to a flowing move involving Bowen, who had earlier had an effort cleared off the line by Ayling.

Leeds, in contrast, had barely posed an attacking threat so the half-time introduction of Raphinha for Greenwood was little surprise.

Still it was West Ham who continued to look the most dangerous. Antonio flashed a ball across the box that was begging to be converted before Bowen broke into space but saw his shot blocked by Meslier's legs.

A rare chance arrived for Leeds as the game entered the final 20 minutes.

Mateusz Klich smashed a volley goalwards and Leeds had two players well positioned. But Daniel James only got half a touch and that distracted Jack Harrison who could not readjust his feet to turn the ball in.

And after Fredericks went close again, James diverted another Leeds opportunity wide when he should have scored, blowing the chance to take the game to extra time.

The importance of that miss was underlined at the death when Bowen slipped Antonio's pass through Meslier's legs.

Jermaine Beckford and Jermain Defoe have agreed that West Ham's opener against Leeds in the FA Cup should not have stood.

Manuel Lanzini gave the Hammers the lead in the Third Round tie with a scrappy goal following a scramble inside the box.

There was a lengthy VAR check though for Jarrod Bowen's involvement in the goal before Lanzini struck the ball into the net.

The point of contention was whether a block on a Nikola Vlasic shot ricocheted back off the Croatian into the path of Bowen who went for the ball from an offside position.

VAR eventually decided that the goal should stand but ITV pundits Beckford and Defoe were surprised at the decision.

Former Leeds striker Beckford said: 'I actually thought it was offside. When we originally see it in real time I thought great movement, great positioning etc.

'But you see here just as the connection is made to have a shot which obviously is blocked, I feel Jarrod Bowen is in an offside position.

'He starts in an offside position and goes for it, Meslier gets a touch on it and the ball falls to Lanzini. Lovely finish but you know when it back to VAR I actually thought they were going to pull it back and in my opinion I think they should have done.'

Defoe who played for the Hammers towards the start of his career, agreed with Beckford.

He said: 'When you slow it down and you can see he was in an offside position and he was on the move and went for the rebound so that's why when we watched it back we thought it definitely was going to be given offside.

'Lanzini follows in and it's a lovely finish. Just that fortune they needed at that stage of the game as there was not much in it before that.'