Who should start upfront? Spotlight on Tyler Roberts display from bench in Leeds United no 9 role at Brighton - YEP 28/11/21 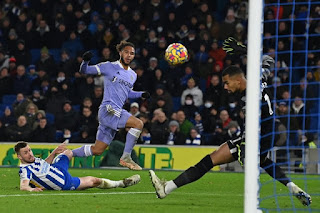 Tyler Roberts was handed half an hour from the Leeds United bench at Brighton and produced more danger than any of his Whites team mates in his short time on the pitch.

Roberts was overlooked for a starting place in last Sunday's clash at Tottenham despite Leeds being without key attacking trio Patrick Bamford, Raphinha and Rodrigo as 19-year-old Joe Gelhardt instead started upfront.

Gelhardt dazzled at Spurs and would have fully deserved keeping his place in the side for the clash at Brighton - even with Raphinha and Rodrigo returning - yet Dan James was selected to lead the line in the continued absence of Bamford who is now nearing a return from an ankle injury.

With Rodrigo lining up in the no 10 role and flanked by Raphinha and Jack Harrison out wide, that meant both Gelhardt and Roberts sitting on the bench and it was Roberts who Whites head coach Marcelo Bielsa turned to in search of a different attacking option.

Jamie Shackleton and Pascal Struijk were both brought on during the interval as Kalvin Phillips and the booked Junior Firpo made way after an extremely disappointing first-half display from the visitors.

Leeds then marginally improved and Bielsa opted for to make his final change in the 63rd minute as Roberts and not Gelhardt was brought on for James who moved out wide.

The change raised eyebrows as Gelhardt stayed on the bench despite his superb display at Spurs yet Roberts had a definite impact and can count himself very unlucky not to have scored at least once.

In just over half an hour on the pitch including stoppage time, the 22-year-old fired in four shots, three of which were on target and two of those were only kept out by excellent saves from 'keeper Rob Sanchez who made a more routine stop to 'keep out the other attempt that was on the mark.

That came after a lovely through ball from Pascal Struijk played in Roberts down the right and the forward worked room to fire in a low shot that Sanchez saved.

Moments later, kamikaze Brighton defending allowed Leeds to tee up Roberts in the box and the substitute looked to do everything right in firing a firm low shot back across goal that would have flown into the far right corner but for Sanchez saving with his left foot.

From the subsequent corner, Roberts then went close again and his deflected effort was heading into the bottom left corner until Sanchez brilliantly turned the ball behind.

United only managed 11 shots at goal in the entire match at Brighton and only four of those were on target.

Despite not coming on until after the hour mark, three of those efforts came from Roberts who can be pleased with his night's work, Stuart Dallas firing in the other which Sanchez also saved.

Leeds were undeniably disappointing at Brighton and it was odd not to see Gelhardt introduced at any stage yet despite not scoring Roberts made a positive impression.

The question is whether Gelhardt would have done even better at a time when Leeds are badly missing Bamford.

On recent evidence, Gelhardt and Roberts appear the two best options upfront whilst Bamford remains out and Bielsa has a big decision to make as to who starts at no 9 in Tuesday's hosting of Crystal Palace.

Rodrigo - who looks best as a no 10 - and clear natural winger Harrison are other options but lately James appears Bielsa's first port of call, despite first Gelhardt and now Roberts clearly offering more in that role.