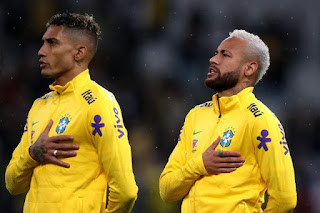 Raphinha is happy at Leeds United and hopes to achieve his Champions League dream with the club.

If he plays, which seems likely given the absence through injury of fellow attacker Neymar, the 24-year-old will earn his fifth cap since an October debut for Tite's side. His impact on the national team has been impressive, with two assists on his debut against Venezuela and a pair of goals against Uruguay in only his third appearance.

Tonight's game against Argentina presents not only a chance for Brazil to take revenge for their Copa América final defeat, but the possibility for yet another dream to come true for the former Rennes man.

"What player would not like to play against Argentina?" he said in an interview with AS. "And I'm not saying it because of what happened in the final of the Copa América. But because Argentina is one of the best teams in the world. Their squad has players of a very high level and it is an opportunity to be able to participate in a game like that. It is one of the classics of world football, I wish I could play and participate with my teammates and get a victory."

Raphinha, who says his national team boss is an 'exemplary professional' who simply asks him to do what he does for Leeds, has gone on record a number of times to salute the impact on his career of club manager Marcelo Bielsa.

Leeds' top goalscorer believes he and his team-mates are lucky to have the Argentine as their boss.

"From my first days at the club, I already saw how special Bielsa was," he said.

"He is a guy who works a lot, who knows a lot about football. He is the typical professional who dedicates 100% of his time to the institution he represents and we are very lucky that he is our coach. He knows how to get the most out of each one of us. This makes us raise our level."

Raphinha's incredible impact for Leeds, since an October 2020 move from Rennes, has made him a marked man both on and off the pitch. Last summer it emerged that Liverpool were keen on his services, although they never made contact with the Whites over a potential move. Adding five Premier League goals to the six he scored last season will only have increased the interest in the winger, from clubs operating at Champions League level.

Right now, however, he's more than content at Elland Road and insists he would like another of his dreams to come true there.