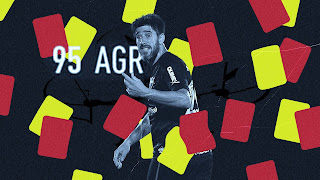 Maybe every team needs a Pablo to lift them from the malaise of gloomy times. On Monday, Pablo Perez scored the only goal of the game as Newell’s Old Boys beat Union de Santa Fe 1-0, recording just their sixth win in twenty league games this season. Marcelo Bielsa’s old side are now 19th of 26 teams in Argentina’s Primera Division.

Newell’s are currently searching for their fourth manager of 2021 after the recent sacking of Fernando Gamboa, former defender of Bielsa’s time in charge. Bielsa famously once told young Gamboa he would cut his finger off if it meant victory in the clasico against Rosario Central. “But then, if we are lucky enough to win five clasicos, you lose your hand,” Gamboa said. Bielsa replied, “Gamboa, you do not understand anything, you do not understand anything.” Gamboa later missed the decisive penalty in Newell’s Copa Libertadores final defeat to Sao Paulo. When he apologised to Bielsa the next day, El Loco told him he was crazy.

36-year-old Pablo Perez is one of a number of ageing players in Newell’s current squad. Against Union, the midfielder was trying to thread passes to striker and captain Ignacio Scocco, also 36, who was later replaced by 40-year-old former Liverpool winger Maxi Rodriguez. In a team of two extremes, Rodriguez is old enough to be the father of right-back Tomas Jacob, who is just 17.

As Bielsa advocates, the experienced players took responsibility as Perez chested down a clearance around 25 yards from goal, half-volleying the ball into the bottom corner and inspiring the commentator into a ten-second ‘¡GOOOOOLLLLL!’ Before you start telling me it’s an underwhelming half-volley, take a moment to remember how his namesake Pablo Hernandez’s even scruffier half-volley against Millwall in the promotion season made you feel.

🚀 The goal that won the game for #Newells this evening. Pablo Pérez with a 𝘨𝘰𝘭𝘢𝘻𝘰.

It’s a shame I’ve not learned about Perez sooner, because he seems like a right laugh. In the most recent edition of FIFA, no player ‘betters’ his rating of 95 for aggression, which I think makes him the hardest footballer in the world. While Perez was playing for Boca Juniors in 2018, someone even made a dedicated Perez game for Android called ‘Pobla Peres Run’, in which the aim is to collect yellow cards and dodge the referees brandishing reds. Despite only being booked once this season, his reputation is well earned; he received eleven yellow cards in nineteen appearances in 2017/18, seven in fifteen the following year, and nine in seventeen the year after. What can you say, the boy loves a booking!

Perez’s aggression rating on the new FIFA may have something to do with an incident in a clasico against Rosario Central in May. The game was interrupted in the fourth minute by a drone flying a banner mocking Newell’s. After a Central player removed the drone from the pitch, Perez made sure it was decommissioned, by smashing the fuck out of it. Newell’s lost 3-0, and Perez was subbed off at half-time after — you guessed it — getting booked.

Here's Pablo Pérez stamping on the Central drone at the start of the game 😂 #ClásicoRosarino pic.twitter.com/R0CKSJ1Y6S

One of the many theories behind Leeds’ slow start to the campaign has been the failure to replace the experience of Pablo Hernandez and Gaetano Berardi following their exits at the end of last season. Judging by his goal and disciplinary record, Perez might just provide the best of both worlds, and even with Adam Forshaw back fit, another central midfielder wouldn’t go amiss. Marcelo, Victor, I like this guy. Over to you.