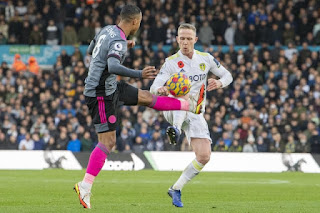 Adam Forshaw says he will never forget his first Premier League start for Leeds United in an emotional tribute.

The Whites midfielder has battled back from a complex hip issue that forced him to the sidelines for nearly two whole years.

Forshaw missed the majority of the club's Championship promotion campaign and was then a spectator throughout United's debut top flight season after 16 years away.

The 30-year-old suffered a number of setbacks during his recuperation though player and club kept faith in the recovery process at Thorp Arch.

He made a first return to on-pitch action in the League Cup as he built up his fitness before picking up cameo appearances at Southampton and Norwich City.

Amid injuries, Forshaw was selected from the start against Leicester City by head coach Marcelo Bielsa on Sunday afternoon - completing 90 minutes in what was arguably a man of the match performance in the heart of midfield.

His first top division start for the Whites came four years after his last one in the Premier League at Middlesbrough and brought to a close nearly 800 days since his last league start for Leeds against Swansea City in 2019.

Forshaw, understandably, cut an emotional figure post-match and took to social media afterwards to say thanks.

"A strong performance from the team and a point against a good side. We’re pushing in the right direction," Forshaw wrote.

"On a personal note, it’s a game me and my family will never forget. I’ve worked hard to make this day happen again but I couldn’t have done it without the support of everyone at Leeds United. "

A number of Leeds teammates also posted words about the midfielder.

"Felt good to have his fella back. Long time coming mate, proud of you," Kalvin Phillips wrote.

Tyler Roberts added: "Adam Forshaw everyone. The work and journey he has had is extraordinary. A professional for everyone to learn from. Love you bro."

Club captain Liam Cooper said: "Tough times don’t last! The mentality to get back is something we should all appreciate. Delighted for you mate. Different class today."

Other players were left pleased by the point against the Foxes at Elland Road in a game where Bielsa's side were unlucky not to win ahead of the November international break.

Whites forward Rodrigo said: "Amazing atmosphere, very good team performance… today we couldn’t win, but I am proud of the team and the club. Thanks for your support."

Pascal Struijk also said he thought United were getting back to somewhere near their best form.

"Working towards our best selves," the defender added. "A good team performance and amazing support from the fans. See you after the break."

Diego Llorente said: "One point against a great team. We keep improving and we keep growing. Happy to return to the national team although the injury of a teammate is never good news. Cheer up, Eric [Garcia]."

Substitute Charlie Cresswell posted: "Unlucky to have not taken all 3 points today, fans were electric as always! See you after the international break."