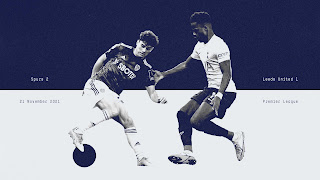 Continuing a theme from the draw with Leicester, Leeds United are still stuck being a very normal Premier League football club, not sacking their manager, not taken over by a nation state, no crimes alleged against its players, not mired in any long running controversy, not employing Harry Maguire. They’ve just got a lot of players injured or ill and are finding it hard to win games of football.

At the new White Hart Lane, though, Leeds were sucked into Spurs’ psychodrama and found it too powerful. Until half-time Tottenham were Jose Mourinho’s Spurs, Nuno Santo’s Spurs, a bagful of players who’d rather be anywhere else doing anything else, inert in a glittering stadium. They were booed off at half-time, as usual. The difference was the new manager, Antonio Conte, who Marcelo Bielsa identified last week as a “master” of “convincing” players to follow his ideas. After a goalless draw at Everton in his first game, and a fifth consecutive half without a shot on target, Tottenham’s needs finally coincided with their manager’s strengths at half-time. Did he convince? Just a bit. Did he persuade? And then some. Did Spurs come out for the second half looking like one of the most volatile coaches in football had spent fifteen minutes introducing his new players to his inner Warnock? It sure looked that way.

Until half-time this looked like a game Leeds were winning, and that Bielsa, pitted against Conte for the first time, had organised his way in spite of lacking personnel. The back line morphed from the teamsheet to the pitch and Spurs-stifling reality, Kalvin Phillips dropping into central defence spare to watch Harry Kane, Diego Llorente keeping an eye on Son Heung-min while pushing right like a wing-back behind right-midfielder Stuart Dallas, who was bunched up behind right-winger Daniel James, all with the intention of stopping Spurs’ left wing-back Sergio Reguilón. That worked. Liam Cooper was the other centre-back, also on Kane, with nominal left-back Pascal Struijk following Lucas Moura centrally into deep positions so he looked part of a back three; Jackie Harrison did not have the back-up James had on the other wing, but he had the measure of Emerson Royal by himself. The goal proved that, when confidence-starved Harrison made it all happen with a trick and a nutmeg, an aggressive sprint from the wing and a powerful cross, that the also under-weather Dan James met eagerly in the middle. There was no Raphinha in the side, no Rodrigo, no Pat Bamford; just fan-panic, Joe Gelhardt and these guys. It took almost a half of Leeds’ usual chance-aversion to get it, two long range drives by Dallas and Adam Forshaw the best efforts before it, but this was a really good goal.

With their wing-backs blocked and their central attackers marked, Conte’s Spurs couldn’t play how Conte’s teams play, not even like the Ladybird book version of it the new coach has shared in the time he’s had in the international break. Rather than trying to do something new like Spurs, Leeds this season are trying to rediscover the best of their old tunes, and for the second successive game Adam Forshaw played like Elvis in the ’68 Comeback Special, a performer presumed to be out of touch with modern trends announcing they’re still rich and vital, proving everyone wrong for forgetting how good the old hits were. He bossed midfield, and while people wondered why Bielsa had put Phillips in defence, perhaps the answer was because with Forshaw around, he can. The quality of Forshaw’s performance, and Phillips’ at the back, made Geoff Shreeves’ line of questioning about the tactic on Sky after the game seem weird. Bielsa will often point to what happened in the game as an answer to the success or failure of a tactical move, and the way Leeds played in the first half said everything about why Phillips was at the back. He was there because it was a really good idea.

Phillips looked frustrated in his interviews after the game. He laughed and said, “I don’t know,” when asked why Bielsa put him in defence. But that’s how Phillips always answers questions about his own game. The other week he was describing himself as “almost a dog” next to Declan Rice for England, and comparing himself to Italy’s Marco Verratti as someone who can “rat about”. He shrugs off the tactical questions as above a ratty dog’s pay-grade: he doesn’t know why the coach did it, but he knew what the coach wanted, so he just did that, also known as his job. His game from the back was probably not uppermost in his thoughts, either, given how well it had worked. The frustration maybe had more to do with the second half. That was best described by Bielsa, talking after the game about trying to win back control of the midfield. “We started in the second half with Forshaw and Klich, after that I attempted with Phillips and Forshaw, after with Phillips and Tyler, after with Pascal and Tyler and finally with Pascal and Dallas. There was far too many movements to solve the same problem and in the end we didn’t solve this problem.” Tru heads may remember the tense promotion season awfulness at home to Barnsley, when Bielsa’s constant tactical changes had Luke Ayling on the point of marching to the technical area to strangle him. After a change every six minutes in the last half hour at Spurs, and a defeat, I can imagine Kalvin in that mood.

A fully firing Forshaw might have helped Leeds’ midfield to the end, but he was still there and tiring when Spurs took over the second half for themselves. Speaking afterwards, Reguilón made it sound like Conte told them simply to want it more. Like I said, prime Warnock, even if Conte denied that: “I found the right words … because in this kind of situation, it’s not good to shout, but to have a good chat to show confidence,” he said, his voice suspiciously hoarse. Reguilón also mentioned them going man for man, and this wasn’t only defensive, this was about the Spurs players looking at their markers and deciding to try beating them. Rather than being cowed by Struijk or Llorente into giving up possession, Moura and Son started turning them around, running for the penalty area along a curve, backing their pace and skill to either get them away from their marker or get them fouled. Conte loves sending the ball around a corner, and if one of his players takes it there at his feet, all the better for him.

A luckier Leeds might have got something from the game. The old truism about Spurs, though, is that if you make one mistake, Harry Kane or Son will punish you. This time Kane and Son actually let Leeds off their first errors, a shot by the first saved by Illan Meslier, one by the second cannoning off Llorente and the bar, all while James and Gelhardt took digs at the other end. Then it was Pierre Højbjerg who seized on a little looseness along the defensive seams that had Leeds rushing to the front post to keep Moura and Kane from piling together onto a cross, then hopeless when Højbjerg buried the rebound the other way. Hopeless, helpless, hapless — what the hell about the winning goal, an Eric Dier free-kick deflecting off the wall, onto the post, and so perfectly into the path of Reguilón the woodwork should be credited with the assist and take Dier’s place in midfield. You can argue Spurs made their luck here with Moura’s run towards the area that Cooper stopped with the foul Dier shot from. You can also go bollocks because it just wasn’t fair even if, on the balance of the near misses and United’s scrambling for changes to stop the tide, Spurs deserved it.

Leeds United’s sick list is not fair and they don’t deserve it. Raphinha was ill, Rodrigo’s foot was hurting, Pat Bamford’s ankle still isn’t repaired; the first two have been combining into form in the absence of the third, last season’s top scorer, and losing all three isn’t a question of squad depth. No squad copes well when three of the best players from one part of the pitch are all missing together. Joffy Gelhardt got his first start and Stuart McKinstry got his debut from the bench — it went less noticed, but Crysencio Summerville was also absent presumed injured after scoring for Netherlands Under-21s — while Jack Jenkins was a sub and fifteen-year-old Archie Gray came along for the ride. “He was an option to be on the substitutes bench,” said Bielsa, “but in the end he wasn’t picked.” It feels far from ideal, but only history can work this out for us, five years from now when Joffy and Gray are either in the team, or they’re not. The young players didn’t make a magical difference here but that’s hardly ever how it works. Potential and opportunity rarely perfectly align, so you get a paradox, that a fifteen year old isn’t usually involved if all is well with the first team, but is only involved if they’re an exceptional player. We won’t know whether to laugh or cry about young Gray going to this game until he’s become Peter Lorimer, Chris Dawson or something in between. We leave the new White Hart Lane wondering about two things. One, what the result would have been with a fully fit first team. Two, what it might have been if Archie Gray was shaving yet.