Gary Speed: Remembering what made Leeds United’s and Everton’s ‘Speedo’ so special on and off the pitch - Yorkshire Post 27/11/21 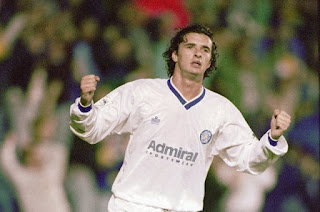 SOLID-GOLD footballing ability, class and charisma on and off the pitch with the matinee idol looks to match; Gary Speed was the man who had it all to Leeds United supporters.

Those present at Brighton later today will remember ‘Speedo’ on the 10th anniversary of his untimely passing and think of all those good, special times.

And how good and special they were.

Speed provided one such moment not too far away on the south coast in Southampton for instance, scoring two typically immaculate goals in a handsome 4-0 victory at the old Dell early on in that 1991-92 campaign when Leeds first served notice of what was to come in a season which ended in glory and a first top-flight title since 1973-74. 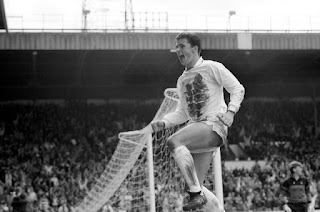 Who can forget another win by the same margin and not think of Speed’s involvement a little earlier on Easter Monday in 1990 when Leeds saw off Sheffield United in an iconic fixture at Elland Road en route to promotion.

That game, of course, prompted that legendary line from former club commentator John Boyd when Speed hared away to fire home the hosts’ fourth goal in front of the Gelderd End. ‘Go on Gary Speed, get one yourself, son’.

That phrase will again be recalled today in tributes to Speed as it was a decade ago when the Leeds United family, stunned by the news of his death on November 27, 2011, came together to remember him.

It was the banks of the Trent two days later where Leeds followers watched their side commemorate Speed with a masterful 4-0 victory at Nottingham Forest – fittingly led by a man who signed schoolboy forms at United on the same day as him in Simon Grayson.

The then Leeds manager, who played, trained, roomed and earned his coaching badges with his great friend, asked his players beforehand to win the game for Gary. Goals from Robert Snodgrass, Jonny Howson, Luciano Becchio and Adam Clayton ensured they emphatically did just that.

It was an emotional November night in the East Midlands which no-one who was there of a Leeds persuasion will ever forget.

A minute’s applause was participated in by Leeds and Forest supporters as historic rivalries dating back to the feuds of Brian Clough and Don Revie were put to one side.

The travelling supporters housed in the Bridgford Stand stuck to a pre-match plan by singing Speed’s name for 11 minutes – 11 being his old shirt number – during the first half.

At full-time, Grayson went to the away end and pointed to the sky before leaving the field in tears.

Grayson, probably by his own admission, would never profess to being a Churchillian-type orator and always preferred deeds to words from his side.

But his words after the game in Nottingham were stirring and from the heart. 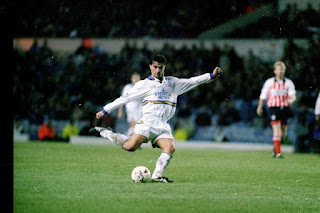 Dedicating the win to his mate, Grayson said: “Gary Speed was a fantastic person and I wanted my players to go out and produce a performance for him. That was right out of the top locker of our performances.

“It was very poignant that the first goal came right as the 11 minutes of singing ended and was a left-footed shot (from Robert Snodgrass).

“Gary Speed scored many goals like that. It’s been difficult, but I’m a very proud manager tonight. I’m delighted to have got a result for Gary Speed.”

Four days later, Elland Road staged its first game since the passing of the graceful midfielder. A stylish Celt in Snodgrass settled the game against Millwall with a decisive run and header. Speed again would have approved of that.

In truth, it was a day remembered not for the football.

It was a festival of remembrance. A home crowd of 27,161, including venerated guests alongside Speed’s family members – his widow Louise was among those present – came to honour a man who felt very much one of their own.

Wreaths were laid by the other members of that esteemed Leeds midfield quartet in Gordon Strachan, David Batty and Gary McAllister alongside then Millwall manager Kenny Jackett. Again, old club rivalries were put on hold on that day.

He may have been brought up as an Everton blue, but Speed’s second family was United, where he spent his formative years as a man and a professional footballer.

The video montage dedicated to Speed just before kick-off tugged strongly on heartstrings before Leeds focused on business just as the ultra-professional Speed would have wanted.

Leeds went 2-0 up and it was the prelude to hearty chants of “2-0 to Gary Speed”. A well-choreographed day appropriately ended with the right result.

Speed’s football prowess spoke for itself in his time at Leeds and his other clubs. Yet for those United players who rubbed shoulders with him on a daily basis, it was his personality and qualities as a human being which they recall first and foremost.

His midfield cohort McAllister perhaps summed it up the best. ‘Gary was just Gary.’

Despite his many attributes, the lad from the North Wales village of Mancot was someone who had no airs and graces or lofty sense of self-importance.

He earned his rites of passage alongside a grounded manager in Howard Wilkinson, working-class lads and down-to-earth pros within a Leeds dressing room where getting ideas above your station was quite simply not in the equation.

Kingpin was the redoubtable Strachan, who acted as a mentor to Speed and you can bet your bottom dollar that an icy glare or acerbic comment from him would have shot down any young player who thought he knew it all pretty quickly.

But you get the impression no-one ever had to say anything to Speed, who everyone thought the world of. ‘Mr Perfection’ as Imre Varadi aptly used to call him.

Another team-mate in Jon Newsome recalled being with Speed at his parents’ house in Sheffield after Leeds had just won at Bramall Lane in April 1992. Liverpool’s subsequent victory over Manchester United at Anfield gave Leeds the championship and two young footballers having the time of their lives promptly went up the M1 to Leeds to celebrate.

Speed’s former boot boy in Noel Whelan, now a football ambassador at Leeds, remembered an approachable first-team professional who took him under his wing when he was a YTS apprentice.

In the words of Whelan, ‘nothing was ever a chore for Gary’, with the former striker fondly remembering buying his first pair of Levi red-tabs with some Christmas money given to him by Speed, who would also provide him with boots from his supplier in Essex.

Speed’s generosity of spirit made an impact upon many others including another future Leeds and Wales international in Matt Jones.

Speed helped pull him through some seriously dark times after being forced to retire from playing at just 23.

Jones would later pay back that support in his own unique way after Speed’s passing, embarking on numerous challenges in memory of his compatriot, taking part in marathons, a 24-hour cycle race, scaling Mount Snowdon and a skydive – with all of the proceeds going to charities that Speed supported.