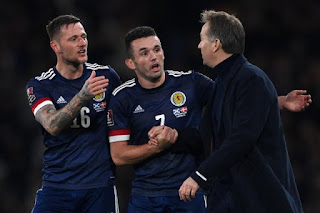 The victory ensured the Tartan Army will play at home in the World Cup Qualifying play-offs in March and Cooper played a big part, on the occasion of his 13th international cap.

It was Cooper's back post header that set up John Souttar for the opening goal, before Southampton striker and former Leeds transfer target Che Adams raced clear to score a fine second.

Cooper's display came in for praise in the Scottish media, with a suggestion that it was sufficient to keep him in the starting XI even when Grant Hanley returns from injury.

David Irvine of The Herald rated Cooper as 8/10, adding: "Strong, fearless and a leader among the central defenders. Kept Cornelius quiet and made some crucial clearing headers as Denmark searched for a leveller. Made his mark in the opposition box too teeing up Souttar’s opener."

The Scotsman's Craig Fowler also had Cooper at 8.10. He said: "Another who was excellent at the back. Put in a number of key blocks and interceptions."

Cooper received a 7/10 rating from the Daily Record and 8/10 from Football Scotland, whose writer Euan Robertson wrote: "Solid throughout. A reliable performer in Grant Hanley's absence and should arguably continue to start ahead of the Norwich City man. Excellent assist for Souttar's opener and put his body on the line to preserve Scotland's clean sheet."

Ace Football rated Cooper as 8/10, BBC readers scored him at 8.35 and Whoscored.com's rating was 8.10. Only goalscorer Souttar received a higher rating on Whoscored.com.