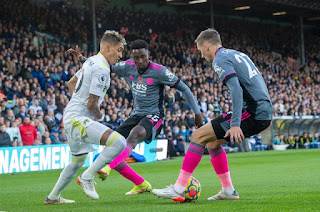 Leeds United outplayed Leicester City at Elland Road, yet were grateful to video assistant referee Peter Bankes to even get a point.

The Whites' performance was not quite as much of a throwback as the brass band performing before kick-off but this was the team we have got used to under Marcelo Bielsa - for better and for worse.

The lack of ruthlessness is all that is stopping Leeds from being the team they ought to be. It extended beyond their wastefulness in front of goal in the continued absence of Patrick Bamford, lapses in concentration at the back were costly too, though not as costly as they might have been.

It looked like Leeds has been well and truly sucker-punched when Jamie Vardy touched a Youri Tielemans corner on after 67 minutes, and Ademola Lookman tapped it in. His left boot was offside.

Defeat would have been incredibly harsh on a home team who had twice as many shots as the visitors - even a draw was. Not only were their players on form, with Jack Harrison looking a lot more like his old self, the usual from Raphinha, and Rodrigo on the winger's wavelength especially during a rampant first half, but for a spell after the interval in particular, Elland Road was on top of its game too - noisy, encouraging, expectant.

As it was, they had to make do with a point that took the team above Aston Villa and Watford and be glad of it. Both those clubs have sacked their managers for their starts to the season but there is little prospect of Bielsa going the same way. When you see the sort of football he created on a Sunday afternoon, you would have to be mad to say thanks, but no thanks.

To see Raphinha's goal in isolation, you might have thought it was lucky and it was, but it was only what he and his team deserved.

The free-kick the winger won was soft, and his delivery seemed more like a cross than a shot but when Rodrigo failed to stretch to it, Kasper Schmeichel, who had to wait to find out if he would, was unable to stop the ball curling inside the far post.

The 26th-minute goal, though, was fair reward for Leeds's high-octane start.

The very start had been anything but encouraging, Diego Llorente's error around 35 seconds into the game and shortly after it was revealed he was a late call-up into the Spain squad for the upcoming World Cup qualifiers, letting Lookman in, only for his touch to let him down.

But once that was out of their system, Leeds were up and running. Rodrigo's weak shot did not tax Schmeichel but Jack Harrison's as he cut inside did, and needed to be well tipped wide by the goalkeeper, who then had to save Kalvin Phillips's header from the corner.

Raphninha went down appealing for a penalty as he latched onto the loose ball but again it was optimistic. The fear is that he and James will suffer boy who cried wolf syndrome, but it did not count against him later. When he was genuinely fouled in the second half, though, referee Darren England waved play on.

Phillips had Adam Forshaw for company on the latter's full Premier League debut for Leeds, allowing what would normally be a Leeds 4-1-4-1 to be a 4-2-3-1. As well as the extra insurance it provided to the defence, it also gave Rodrigo a bit more freedom behind Dan James and the Spaniard linked well with Raphinha, as bright as the pink socks Leicester wore with their dull grey shirts.

In the 16th minute the winger nutmegged Harvey Barnes, played a one-two with right-back Stuart Dallas then released Rodrigo, only for Schmeichel's outstretched leg to stop the move ending at the feet of James.

Again in the 24th minute Raphinha and Rodrigo linked well but again the next pass was cut out. Still, a goal looked on the cards.

The problem was, when Leeds scored it, they switched off just long enough to be punished.

Apart from Pascal Struijk mopping up well from left-back midway through the first-half, Leeds had not really been troubled since the opening stages but they ought to have learnt when Leicester were last here how good they are at throwing sucker punches.

The second half started in the same dozy manner as the first, a Liam Cooper backpass inside the first minute bobbling past Illan Meslier but crucially directed wide of the post.

Then it was back to it, foot to the floor again.

Harrison won a corner with a tremendous cross but somehow put it over with his thigh from a few yards out when Phillips helped the ball to him from it.

When Harrison had a shot blocked, James's follow-up was wide. Rodrigo shot straight at the goalkeeper.

The fans were being whipped into a frenzy, the whirling of scarfs and pumping up of volume putting Leicester under as much pressure as anyone on the pitch.

James curled wide after a corner was not dealt with, Rodrigo rippled the side-netting with a volley from Dallas's cross.

After 15 minutes on onslaught, Leicester started to find their feet, breaking the game up with free-kicks and substitutions, and forcing Leeds to rethink by changing from the three-man forward line to the pairing Bielsa's team-sheet seemed to be anticipating.

Tielemans's 62nd minute cross nearly found Jamie Vardy and the net, but was instead met by Meslier's gloves. Five minutes later he was beaten, only for the VAR to intervene to the noisy delight of Elland Road.

Leeds could not rediscover their momentum, Raphinha's overhit pass after brilliantly beating Timothy Castagne an example. Meslier had to come off his line to tackle Tielemans after Cooper's poor touch and Caglar Soyuncu shanked a shot with Phillips throwing himself in front.

Leeds were hoping for a 90th-minute penalty when the ball struck Daniel Amartey but they had already had one helping hand from VAR. They could do with helping themselves a little bit more.