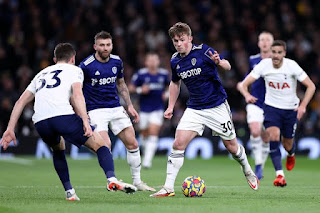 Patrick Bamford has issued advice to "unbelievable" young Leeds United forward Joe Gelhardt that could make the teen's game even better ahead of Saturday's clash at Brighton.

Nineteen-year-old England youth international Gelhardt was handed a first Premier League start in Sunday's clash at Tottenham Hotspur for which Whites no 9 Bamford was among six players ruled out through injury.

Spanish international forward Rodrigo also missed the contest with a minor foot issue and Gelhardt was selected over and above Tyler Roberts upfront as Dan James shifted to the wing having previously filled in as United's no 9 in Bamford's absence.

James fired the Whites ahead one minute before the break as part of a dominant first-half performance from the visitors but Spurs rallied strongly after the break and left with a 2-1 victory after strikes from Pierre-Emile Hojbjerg and Sergio Reguilon.

But Bamford felt Leeds were unfortunate to leave with nothing and was particularly impressed with Gelhardt who fired in four shots on goal - the same amount as Harry Kane but with one more on target than the England captain.

Now Bamford just wants to see Gelhardt spending more time in the box as part of his education as a no 9.

"There were a lot of times in the first half where we got into great positions down the wings and there was no one in the box," said Bamford, speaking on the Official Leeds United Podcast.

"I am looking at that thinking someone has got to get there.

"To be fair, before the game, it must have been on the Saturday when Joffy found out he was playing, I said to him 'just whatever you do, just shoot, just when you get the ball just shoot, it doesn't matter if you miss or whatever, just keep shooting.'

"And I thought until his legs went in about the 60th minute I thought he was unbelievable and after the game I was saying to him 'good, you did what you had to do, you were strong, you held the ball up well and you shot.'

"I said 'the only thing is, if you are playing 9, make sure you spend more time in the box than out of it because there were some times' and he was like 'yeah, yeah, yeah I know.'

"He was listening and I think he was just kind of buzzing that he had made his first start but the way that he played, he looked like he had started a fair few games."

Reflecting on the feeling in the Leeds camp after the defeat ahead of Saturday's trip to Brighton, Bamford admitted: "I think it was one where we felt like we should have got more from it to be fair because in the first half we looked like a top, top team.

"We looked really good and it was literally just getting that end or last ball which just wasn't quite there but we had then penned in.

"I think every player was outdoing his opponent and then I don't know whether we kind of just ran out of steam a little bit in the second half.

"They came out a little bit more pumped up and they scored two scrappy goals really but it was disappointing, especially after the way we played in the first half."

Bamford will not be involved in Saturday's contest at Brighton but the striker is in the final stages of completing his recovery from the ankle injury that he suffered in the 1-1 draw at Newcastle United in the middle of September.