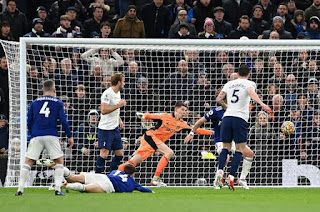 A depleted Leeds United were beaten 2-1 by Tottenham Hotspur in the Premier League on Sunday afternoon.

Marcelo Bielsa was without two shock absences in Raphinha (illness) and Rodrigo (foot) following international action earlier in the week.

The missing duo joined Patrick Bamford, Luke Ayling, Jamie Shackleton and Robin Koch on the sidelines while Junior Firpo was only fit enough for the bench.

Crysencio Summerville was also not involved to take the tally of missing players to seven while a host of the club's development squad filled out the bench in the capital.

Despite the diminished numbers it was Leeds who started the better of the two sides as Kalvin Phillips - who was playing at centre-back - forced Hugo Lloris into a save from an early free-kick.

Gelhardt was proving a busy figure in the final third, holding the ball up and impressing with his strength to pressure the hosts backline.

Stuart Dallas flashed a low effort wide from outside the box which caused hands on heads with the noise levels quieting from the home crowd.

Conte's men finally mustered an attempt on goal at the half hour mark with Phillips blocking a Sergio Reguilón before Liam Cooper provided a vital touch to take a cross away from the lurking Harry Kane.

Adam Forshaw signalled another warning as he let fly from distance with his effort whistling past Lloris' post.

It was Dan James, though, who deservedly opened the scoring on the stroke of half-time after some brilliant individual play from fellow winger Jack Harrison.

The wide man nutmegged Emerson Royal on the touchline before producing an inch-perfect ball across the six-yard box to leave James with a simple tap-in.

The game restarted at a furious pace after the break in the capital as Spurs hit the post just seconds after the restart through Kane thanks to a clever block by Illan Meslier.

Both sides exchanged chances - with Lloris making several saves first from James and then twice from Gelhardt in quick succession.

Conte's team talk gave the home players a lift with Son hitting the bar thanks to a deflection via Diego Llorente but it was Pierre-Emile Hojberg who eventually levelled thanks to a scruffy finish from inside the box.

Spurs pushed on as Leeds struggled to keep the ball and went ahead in fortunate circumstances to complete the second half turnaround.

Eric Dier's free-kick took a huge deflection onto the post and fell perfectly for Reguilón who tapped home the rebound much to United's frustration.