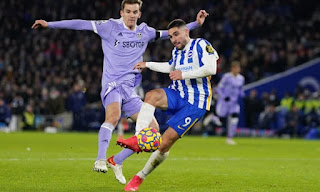 Jonathan Liew at the Amex Stadium

Thirty-one shots, plenty of ambitious attacking football, a web of tactical intrigue, and no goals. The wind blew in off the English Channel, and the Amex howled and roared to keep out the cold, and yet still the ball refused to drop for either Brighton or Leeds, for whom an autumn of underachievement is threatening to give way to a winter of discontent.

Brighton are now without a win in eight, and you don’t need to be as gifted a coach as Graham Potter to gauge where their problems lie. Chance after chance ended up trickling wide or disappearing into the stands, many of them from the boot or the shin of Neal Maupay. For their part, this was painfully thin stuff from Leeds, who for all their customary industry and their flick-book of formations still appear to be missing Patrick Bamford.

For Brighton, a first half that began with such promise ended up feeling strangely deflating. The tactics were flawless, the movement off the ball was sharp, the plan of hitting quick diagonals to Marc Cucurella and Tariq Lamptey was succeeding to the point where Leeds were frequently being overloaded on both flanks. Junior Firpo was booked within the first five minutes. Leandro Trossard started to get more of the ball and immediately began teasing Leeds with it, showing it and whipping it out of sight in a single fluid movement, like a genial uncle with a coin.

In short, Brighton were doing everything right. The problem was a familiar one: putting the blasted thing in the big netted rectangle. Most culpable in this respect was Maupay, who put in a superb shift but missed two easy chances from around six yards. These weren’t your common or garden misses: they were spectacular, blazing misses, the simple failure to make clean contact with a football.

With Brighton also seeing at least three half-decent penalty appeals turned down, it was in a sour mood that the locals disappeared indoors for their fortifying hot drinks.

Their opponents, on the other hand, had plenty of their own issues to address. The return of Raphinha and Rodrigo had promised greater incision for a team who have looked uncharacteristically blunt in recent weeks. But Leeds were shocking in possession in those early stages, disjointed and distracted and basically quite careless.

To confuse things further Kalvin Phillips, a midfielder, was playing at centre-half. Diego Llorente, a centre-half, was at right-back. Stuart Dallas, a right-back, was in midfield. Marcelo Bielsa has always had a touching faith in his players’ versatility, but more importantly it is a quality he also possesses himself. Before the game was a quarter through, the trio had switched back to their favoured positions.

And despite a marginal improvement before the break, Bielsa really had no choice but to change things again for the second half. Phillips came off for Pascal Struijk, seemingly carrying a knock, and the hapless Firpo was withdrawn for Jamie Shackleton, with Dallas switching to left-back. After a short period of adaptation, Leeds did look more fluid, stepping up their aggression off the ball just as Brighton began to ease off a little. Dallas’s shot from distance forced the first real save of note from the returning Robert Sánchez. Raphinha would have been clean through on goal if his touch had been a bit neater.

The game was beginning to tighten and tense, as it increasingly felt like a single goal might win it. With 25 minutes left Shackleton played a horrible back pass that put Jakub Moder in, only for the midfielder to drag his shot meekly across the goal.

Less than a minute later, Moder missed another good chance, lifting the ball well after the bar after meeting Pascal Gross’s cross at the near post. That was the cue for Potter to make his first change, bringing on Jürgen Locadia for Maupay.

But Locadia never really looked like doing the business either. His first sight of goal was a horribly rushed shot from 18 yards, and as the minutes began to leak away you could sense a certain frustration beginning to gestate. Solly March came on and immediately stung Illan Meslier’s fingertips with a sharp run and shot, but indeed it was Leeds who had the best chances of the later stages, Sánchez making a brilliant save with his legs to thwart substitute Tyler Roberts after a slack pass by Adam Webster.

The storm continued to blow at both ends of the pitch, and ultimately blew out. Leeds will probably be happier with the point, even if – or possibly because – they were the inferior side here. Making a big signing in January is pretty much the last thing you would expect of either of these clubs. But it’s also becoming increasingly clear that Plan A has its limits.